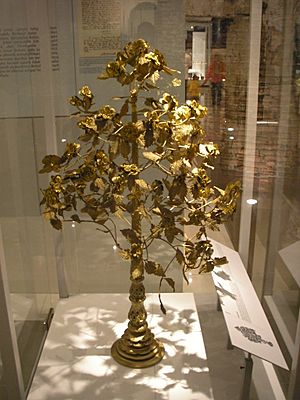 Bunga mas, a form of tribute sent to the King of Siam from his vassal states in the Malay Peninsula

A tributary state is a state that is subordinate to a more powerful neighbour. It was a form of subordination in pre-modern times.

The tributary sent a regular token of submission to the superior power. This was a tribute, a substantial gift of wealth, such as the gold, produce, or slaves. The tribute might best be seen as the payment of protection money. But there were other ways to show submission as well.

All content from Kiddle encyclopedia articles (including the article images and facts) can be freely used under Attribution-ShareAlike license, unless stated otherwise. Cite this article:
Tributary state Facts for Kids. Kiddle Encyclopedia.