The Trigg Hound (also known as the Trigg Foxhound or Hayden Trigg Hound) is a variety of the American Foxhound, developed in Kentucky by Colonel Haiden Trigg.

The Trigg Hound originated in Barren County, Kentucky, in the 1860s, when fox hunting enthusiast Colonel Haiden C. Trigg wanted to develop a faster hound than those available in his area. He used dogs from the Birdsong, Maupin, and Walker lines to develop his strain. 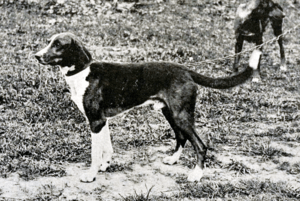 According to W. L. Porter in an article in The Chase, local fox hunters who saw the dogs purchased from Birdsong found them unattractive, but their performance was surprisingly good. Porter stated that the dogs were "racy built, crop ears, rough coated, bushy tails and chop mouthed and looked unlike any fox hound any of us had ever seen". Eventually, Trigg's breeding program became successful on a local and national level.

In 1910, well-known big-game hunter Paul J. Rainey purchased twenty five hounds from Trigg and took them on a hunting trip in Africa, later buying more from Trigg, his son Alanson, and others. After Trigg's death, some fanciers began to lose interest and the strain declined in popularity, despite a small core of active breeders. After Rainey returned from his trips, however, he announced that the Triggs were the "best and most courageous hounds in the world," causing their popularity to rise again amongst hunters.

The Trigg Hound is obedient but "tenacious", and is well-suited to hunting because of its sense of smell and endurance.

All content from Kiddle encyclopedia articles (including the article images and facts) can be freely used under Attribution-ShareAlike license, unless stated otherwise. Cite this article:
Trigg Hound Facts for Kids. Kiddle Encyclopedia.