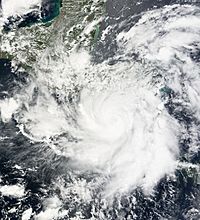 Tropical Storm Alma was a tropical cyclone in the 2008 Pacific hurricane season. It formed off the coast of Costa Rica on May 29. At first, it was forecast to be a weak storm, However, it quickly gained strength. It then hit land on Nicaragua.

Alma was the first tropical storm to ever hit the Pacific coast of Nicaragua. Lots of rain from the storm caused flooding, and eleven people were killed in the area. The remains later became Tropical Storm Arthur in the Atlantic.

All content from Kiddle encyclopedia articles (including the article images and facts) can be freely used under Attribution-ShareAlike license, unless stated otherwise. Cite this article:
Tropical Storm Alma Facts for Kids. Kiddle Encyclopedia.