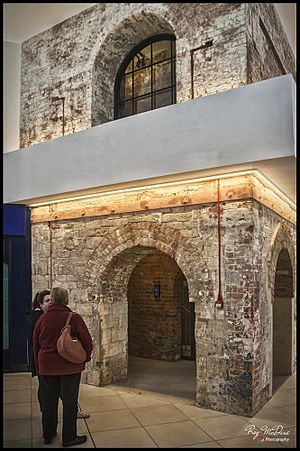 The newly uncovered entrance to Trowbridge Museum, featuring the original brickwork which has survived notable fires. Image taken in 2020.

Trowbridge Museum, in the town of Trowbridge, Wiltshire, England, is a centre for the history of West of England cloth production.

The museum began as one small room in the Town Hall until it moved to the purpose-built Garlick Room in the Civic Hall in 1974. It remained there until July 1990, when the developers of The Shires Shopping Centre allowed it to take over the first floor of the Home Mills building.

The museum has been shut to the public since June 2018 and is due to reopen in the summer of 2020 after renovation and expansion to include a second floor, which will double its size. These works were made possible by £1.1m in funding from the National Lottery Heritage Fund, £900,000 from Trowbridge Town Council, and funds from The Friends of Trowbridge Museum and many members of the public.

Rare Machinery tells the story of woollen cloth production in Trowbridge from its domestic beginnings through to the mechanisation of the process. As well as a complete Spinning Jenny – one of only five examples left in the world – the museum's displays will include a fulling machine which was patented by Trowbridge engineer, John Dyer, in 1833. It was such a technically accomplished design that the machine remained unchanged and was still in use in the 20th century. A fine teazle gig, which was used to raise the nap of the cloth, will also be on display. The machine contains numerous "handles" of teazles (this was the name for the frames into which the teazles were fixed) which were dried out in the Handle House which can be found near the town bridge and Blind House and is almost as rare as the Spinning Jenny.

The Museum organises a bi-annual Textile and Weaving Festival which highlights the town's woollen cloth related architecture and the work of contemporary local textile artists.

All content from Kiddle encyclopedia articles (including the article images and facts) can be freely used under Attribution-ShareAlike license, unless stated otherwise. Cite this article:
Trowbridge Museum Facts for Kids. Kiddle Encyclopedia.