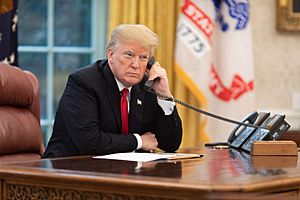 U.S. President Donald Trump on the phone in the Oval Office (pictured in November 2018)

On January 2, 2021, U.S. President Donald Trump called Brad Raffensperger, the Secretary of State of Georgia, for an hour-long telephone call telling him to change the state's vote totals from the 2020 presidential election. Joe Biden won the state in November. Trump has refused to accept the presidential election.

Trump's call with Raffensperger was first reported by The Washington Post and other media outlets the day after it took place.

Many believe that Trump should be criminally investigated and impeached. Many Republicans and Democrats criticized Trump's phone call.

Presidential Elections in the United States

In the United States, the winner of a presidential election is not the person with the most votes. Instead, it is the person who wins the most votes in the electoral college. In this process, a group of people called electors vote for president. Each state has a certain number of electors depending on how many people live there. There are 538 electors in all. For a person to become president, he or she must get 270 or more votes from the electors.

When a presidential candidate wins the most votes in a state, all of those state's electoral votes go to that person.

Elections are done by each state, which means there were 50 different elections going on at the same time. Each state has its own rules about who is allowed to vote.

The Secretary of State is in charge of each state's elections.

Brad Raffensperger was elected Secretary of State in 2018. He and Trump are both members of the Republican Party.

Trump was not very happy about Georgia's electoral votes going to Biden. He said that there was cheating in the Georgia elections and that votes were changed so that Biden would get more. He said government officials in Georgia allowed electoral fraud and made him lose. He asked them to count the votes again. They did, but Biden still got the most votes.

On January 2, 2021, Trump called Raffensperger. He said that he won Georgia by "hundreds of thousands of votes" and that the results were wrong. Neither of these are true. Then he asked Raffensperger to "find" 11,780 votes and add them to the results so that he could be the winner.

All content from Kiddle encyclopedia articles (including the article images and facts) can be freely used under Attribution-ShareAlike license, unless stated otherwise. Cite this article:
Trump–Raffensperger phone call Facts for Kids. Kiddle Encyclopedia.