The station was on the North Island Main Trunk line, and opened on 20 May 1875. Originally it was called Tuakau Road.

The station was on the route of the former Waikato Connection, although it did not stop at Tuakau. The Hamilton-Auckland passenger service is to resume as Te Huia in 2020; and as the new service may stop at Tuakau, in 2018 the District Council allocated money for reopening the station. In 2020 reopening of the platform was put forward as a COVID-19 recovery scheme, at an estimated cost of $15m.

The railway, some 1.5 mi (2.4 km) north of the original Tuakau village, opened as part of the Auckland and Mercer Railway on 20 May 1875, built by Brogden & Co, when it was extended from Penrose. Trains had been able to reach Tuakau since at least February 1875. Tuakau wasn't shown in the 1875 timetable, but was in that of 1876. There was a stationmaster by June 1876 and fencing of the stationmaster's house was mentioned in September 1878.

The stockyards were sold in 1974 and Tuakau closed to passengers and all goods traffic, except in wagon lots, on 14 March 1983. By then there was an island platform, station building, footbridge, low-level loading bank, fitter's shed and New Zealand Co-op Dairy Co's siding at the north end. The station closed on 2 March 1986.

Passenger numbers reached a peak during World War 2, as shown in the graph and table below. 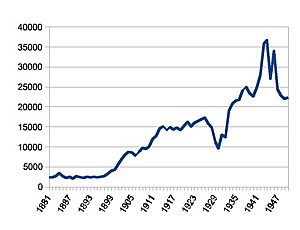 All content from Kiddle encyclopedia articles (including the article images and facts) can be freely used under Attribution-ShareAlike license, unless stated otherwise. Cite this article:
Tuakau railway station Facts for Kids. Kiddle Encyclopedia.