Umkhonto we Sizwe facts for kids 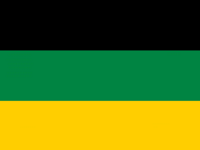 Flag of Umkhonto we Sizwe

Umkhonto we Sizwe (Xhosa: Spear of the Nation), was a South African guerilla movement created in 1961 by Nelson Mandela, Walter Sisulu and other people from the African National Congress. It was created when the government started killing and hurting people who protested against apartheid. Mandela first wanted to free South Africa without violence, but the government created laws to prevent that. Mandela then decided that if black people did not use violence, they would never regain their rights. They carried out many attacks, including bombings. The most deadly of these was the Church Street bombing in Pretoria.

Umkhonto we Sizwe stopped being active in 1990, before the end of apartheid, in 1991.

All content from Kiddle encyclopedia articles (including the article images and facts) can be freely used under Attribution-ShareAlike license, unless stated otherwise. Cite this article:
Umkhonto we Sizwe Facts for Kids. Kiddle Encyclopedia.