The US Post Office—Holyoke Main is a historic post office building at 650 Dwight Street in Holyoke, Massachusetts. It opened in 1935, as a replacement for an earlier post office location at 31 Main Street, and is a distinctive local example of Art Deco architecture. The building was listed on the National Register of Historic Places in 1986.

The building is one of two post office locations serving the city, with a second in Ingleside at the Holyoke Mall. 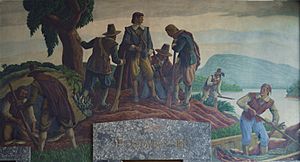 Holyoke's main post office is located in the city's downtown, on the south side of Dwight Street between Elm and Chestnut Streets. It is a broad two-story structure, built with a steel frame and finished in limestone with granite trim. It has a tall central five-bay section flanked by single-story wings that are two bays wide, with entrances in the outer bays of the central section. Each entry is topped by a transom and a panel with a carved eagle. The main lobby is finished in marble terrazzo flooring, with marble wainscoting and plaster walls, rising to a carved cornice. Part of the wall is painted with a mural depicting the early settlement of Holyoke.

The Art Deco building, a stylistic rarity in Holyoke, was built for a total cost (including land and construction) of $284,000. The lobby mural was executed by Ross Moffett as part of a Depression-era jobs program for artists. The building's location was a matter of some local dispute, with competing interests remaining undecided until the Postal Service threatened to withdraw the project entirely. The second floor interior originally held a variety of other government offices, but is now largely unused. 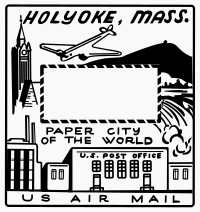 All content from Kiddle encyclopedia articles (including the article images and facts) can be freely used under Attribution-ShareAlike license, unless stated otherwise. Cite this article:
United States Post Office–Holyoke Main Facts for Kids. Kiddle Encyclopedia.