The United States Post Office—Arlington Main is a historic post office in Arlington, Massachusetts. Built in 1936, this Colonial Revival brick structure is most notable for the mural in its lobby, which was painted in 1938 by William C. Palmer, with funding from the Federal Art Project. The building was listed on the National Register of Historic Places in 1986; it had previously been included in the Arlington Center Historic District in 1985.

The Arlington Post Office is set on the west side of Court Street, a narrow side street just north of Massachusetts Avenue in Arlington Center. It is a single story brick Colonial Revival building, with a hip roof topped by an octagonal cupola. The central section of the building projects slightly, with three round-arch bays. The central bay is lined with limestone trim, and houses the recessed entrance. A gable roof section has been added to the roof above the entrance to divert rainwater. The building as a whole is a slightly larger version of buildings the Postal Service was building for smaller communities at the time. 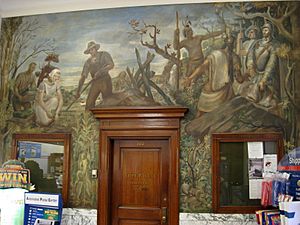 Mural "Purchase of Land and Modern Tilling of the Soil" (1938) by William C. Palmer in the building lobby

The interior is organized with the postmaster's office to the right of the lobby area, and the public box area to the left, with service counters at the center and a work area behind. The walls above the marble wainscoting include a mural depicting the purchase of land from Native Americans, and agricultural scenes reminiscent of the town's agrarian past. This work was executed in 1938 by William C. Palmer, with funding from the Federal Art Project.

All content from Kiddle encyclopedia articles (including the article images and facts) can be freely used under Attribution-ShareAlike license, unless stated otherwise. Cite this article:
United States Post Office (Arlington, Massachusetts) Facts for Kids. Kiddle Encyclopedia.