Utiku railway station was a station on the North Island Main Trunk in New Zealand, and in the Manawatū-Whanganui region. It opened in 1904 and closed in 1986. It was part of the 13 1⁄2 mi (21.7 km) Mangaweka to Taihape section, officially opened by the Prime Minister, Richard Seddon, on 21 November 1904. It closed in 1986. A passing loop remains.

The name Utiku had a biblical origin as a transliteration of Eutychus. 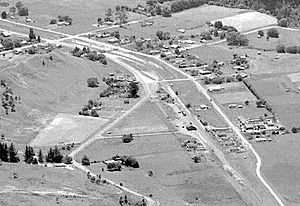 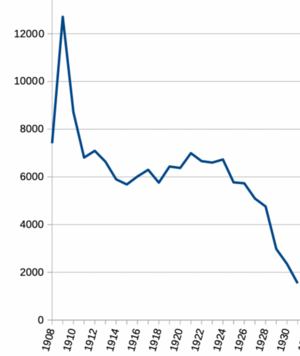 Utiku was important enough to have annual returns of its traffic recorded, as did Taihape to the north and Hunterville to the south. For example, it had 6,599 passengers in 1923, but was 4th largest on NIMT in terms of sheep and pig inwards traffic and still had a substantial timber trade, both inwards and outwards.

On 31 January 1982 the station closed to all but in Ravensdown fertiliser in wagon lots and to that on 31 October 1986.

In 2017 a bank to the south of the station was strengthened with shotcrete and soil nails. 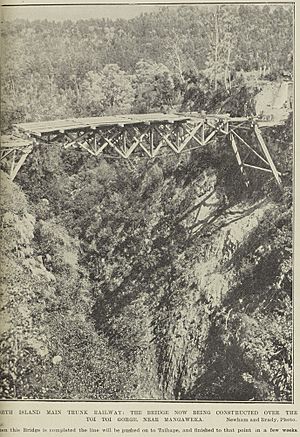 Toi Toi Viaduct under construction in 1904

Toi Toi Viaduct lies about south of Utiku. It is 59 m (194 ft) long and up to 58 m (190 ft) above the Toi Toi Creek. The contract for the steelwork went to Scott Bros of Christchurch. Work on the viaduct was under the cooperative system. It was completed in February 1904 and tested in September 1904. It is one of the few dating from that era, though it was strengthened in 1934. The Mangaweka deviation of 1981 starts just south of the viaduct.

When the railway opened the area was still extensively forested. Like other stations along this part of NIMT, this station had freight from several timber mills.

On 11 May 1904, before the line opened, Albert Gibbs applied for a siding at Utiku. A cable of the tramway suspension bridge, which led to their mill, broke in 1912, resulting in the mill being shut until a new bridge, mill and tramway opened in 1914, the plans having been drawn in 1913. Similar collapses occurred in 1904 and 1920, though no one was killed then. The 1914 bridge was replaced in 1961. Only the northern tower of the 1914 bridge remains. In 1922 the Gibbs Bros butter box factory was blown down. It finally burnt down in 1927.

All content from Kiddle encyclopedia articles (including the article images and facts) can be freely used under Attribution-ShareAlike license, unless stated otherwise. Cite this article:
Utiku railway station Facts for Kids. Kiddle Encyclopedia.