Valentown is the name of an abandoned shopping center located in Victor, New York. The structure was built in 1879 by Levi Valentine and is operated today as a museum. It is included on the National Register of Historic Places. The Official Web Site is located at http://historicvalentownmuseum.org [1].

The three-story structure was built in 1879 by Levi Valentine as the central commercial and community building of a new town to be created by Valentine and named "Valentown". Valentine's motive was a forthcoming railroad line that was to travel past the building. However, Mr. Valentine's forward-thinking plan yielded an unfortunate result when the railroad company went bankrupt and did not complete the line. With no demand for a commercial center in the location, Valentown quickly failed as an enterprise and was abandoned.

In 1940, local historian J. Sheldon Fisher purchased the property and opened Valentown as a museum. The property is owned and operated today by the Victor Historical Society as a local history museum, with artifacts of 19th century life of the Victor and Rochester, New York area.

Majority of the inside of the building remains in the same condition and setup as it was when it was originally built. It contains a general store, meeting room, bakery, harness shop, cobbler's shop, music school, railroad/troller/telegraph office, ticket office, grand ballroom, and multiple display cases filled with early flags and military apparel. It also contains Civil War artifacts, costumes & hats galore, farm implements and household utensils, candle making molds, spinning wheels, railroad & trolley memorabilia, blacksmith tools, paintings, old maps, and much more. It also contains a wagon from the 1700s which was used in the American Revolutionary War

Fisher remained the owner of Valentown until 1998, when the Victor Historical Society, a non-profit organization, bought the museum, its collection, and approximately 14 acres. The organization also bought the Ichabod Town Homestead built in 1835, the early 1800s schoolhouse, and additional buildings. 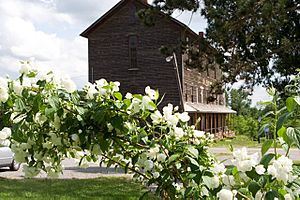 All content from Kiddle encyclopedia articles (including the article images and facts) can be freely used under Attribution-ShareAlike license, unless stated otherwise. Cite this article:
Valentown Hall Facts for Kids. Kiddle Encyclopedia.