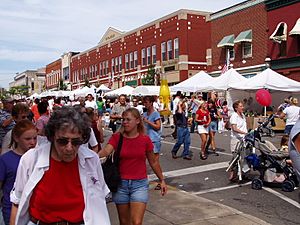 The Valparaiso Popcorn Festival began in 1979 as a way to salute Valparaiso, Indiana-native Orville Redenbacher and popcorn.

Scheduled annually on the first Saturday after Labor Day, the Valparaiso Popcorn Festival is an all day event held in the downtown area of Valparaiso.

Included in the festivities are a 5-mile run (the Popcorn Panic), a block-long kiddie run (the Lit'l Kernel Puff), 5-mile walk, live entertainment, hundreds of food and craft vendors and the nation's 2nd oldest Popcorn Parade. Parade designers are encouraged to use popcorn in their float designs. Early Festivals even offered free popcorn to every attendee.

A popcorn festival is also held in Brazil, Indiana, which was the birthplace of Orville Redenbacher.

All content from Kiddle encyclopedia articles (including the article images and facts) can be freely used under Attribution-ShareAlike license, unless stated otherwise. Cite this article:
Valparaiso Popcorn Festival Facts for Kids. Kiddle Encyclopedia.