Vancouver Public Library (VPL) is the public library system for the city of Vancouver, British Columbia. In 2013, VPL had more than 6.9 million visits with patrons borrowing nearly 9.5 million items including: books, ebooks, CDs, DVDs, newspapers and magazines. Across 22 locations and online, VPL serves nearly 428,000 active members and is the third-largest public library system in Canada.

One Book, One Vancouver

By the late 1890s, the Free Reading Room and Library in the YMCA Building on West Hastings had become overcrowded. During this period, the American industrialist and philanthropist Andrew Carnegie was giving money to cities and towns to build libraries. In 1901, the City of Vancouver approached Carnegie about donating money for a new library to replace the space in the YMCA Building. 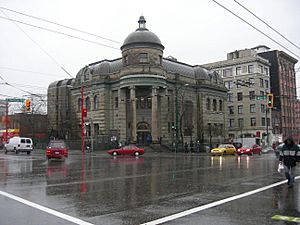 The Vancouver Carnegie Library was completed in 1903. The building was used as the main branch of the public library until 1957. The Carnegie Branch is currently located in the building.

In 1901, American steel magnate, Andrew Carnegie agreed to donate $50,000 to build a city library if Vancouver would provide free land and $5,000 annually to support its operation. A fight immediately developed between East and West side Vancouver as to who would get the new cultural institution. A public plebiscite fixed the site at Hastings and Westminster (now Main) Streets, next door to the first City Hall. The cornerstone was laid by the Grand Lodge of the Masonic Order on March 29, 1902 and under it were placed Masonic documents, a copy of the City’s Act of Incorporation, lists of various officials and examples of the postage stamps and coins then in use. The building was designed by Vancouver architect George Grant and is in the style of Romanesque Renaissance, with a domed Ionic portico and French mansard roof. Granite for the foundation came from Indian Arm and sandstone for the 10" thick walls came from Gabriola Island. A fantastic marble, spiral staircase was built by Albion Iron Works of Victoria. It cost $2.279 million and 9,888 pounds of steel and iron were used. A large multi-panel stained glass window with 3 smaller windows below was designed and crafted by N.T. Lyon of Toronto. Depicted in the windows are John Milton, William Shakespeare, Robert Burns, Sir Walter Scott, Sir Thomas More, and Edmund Spenser. The 3 small windows were removed in 1958 when the library was converted into the museum. They were missing for many years but were located intact and returned to the building in 1985. Inside was hardwood panelled walls and ceilings and oak floors. The rooms were heated by eight fireplaces. There were special reading rooms for ladies and for children, a chess room, newspaper reading room, picture gallery, lecture hall, and on the third floor the Art, Historical and Scientific Association (now called the Vancouver Museum). The library opened in November 1903. This branch is now primarily used as a community centre for residents of the Downtown East Side neighbourhood. 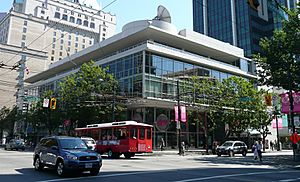 VPL moved its Central branch location from the Carnegie Library to 750 Burrard Street in 1957. The building was used as the Central branch until 1995.

The Vancouver Public Library continued to occupy the Hastings and Main site until the opening of a new central library at 750 Burrard Street in 1957. The move from the Carnegie site to the new location at 750 Burrard began in mid-October 1957, and the official opening of the new library was held on November 1, 1957. The library remained at the Burrard building until April 22, 1995, when it closed in preparation for the move to a new location at Library Square (350 West Georgia Street). The central branch opened in Downtown Vancouver on May 26, 1995 and cost CAD $106.8 million to build. 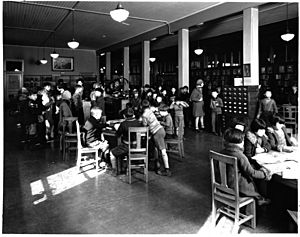 In 1927 the first permanent branch was opened in Kitsilano (2375 West Fourth Avenue). Sixteen years later, in 1943, the second branch, Kerrisdale (Forty-second Avenue and West Boulevard), came into service. Other branches followed throughout the years, with the last branch, the Terry Salman Branch, opening in 2011. The Strathcona Branch, which shared its collection and facilities with Lord Strathcona Elementary School, was removed from the system in 2016, pending the opening of the nə́c̓aʔmat ct Strathcona Branch. The new branch opened in the same community in 2017. 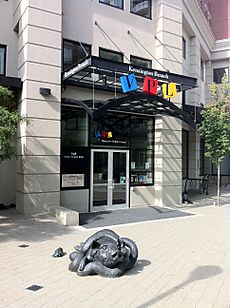 Entrance to the Kensington branch. Kensington is one of 22 VPL branches.

The Vancouver Public Library system now consists of 22 branches situated throughout the city. Since 2013, all branches are open at least Tuesday through Sunday. The administration centre, and also the largest branch, known as the Central Branch, is located at Library Square in downtown Vancouver.

The oldest existing branch, the Kitsilano branch, is the regional reference library for the North Area division of the Libraries. The largest non-Central branch in terms of volumes held, is the Renfrew Branch, with 325,000 volumes. The Renfrew Branch is listed as having the largest square footage, at 16,000 square feet, while the Kensington branch at 7,100 square feet is one of the larger branch libraries.

The approximate number of volumes in each VPL branch are: 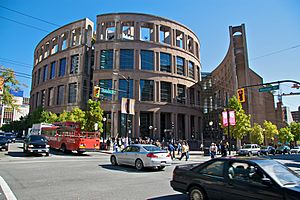 The Central branch of Vancouver Public Library is located in Downtown Vancouver.

Consolidating Vancouver Public Library's Central Branch, Federal Office Tower, and retail and service facilities, the Library Square occupies a city block in Downtown Vancouver. Centred on the block, the library is a nine-story rectangular box containing book stacks and services, surrounded by a free-standing, elliptical, colonnaded wall featuring reading and study areas that are accessed by bridges spanning skylit light wells. The building is located in the eastern portion of the Vancouver Central Business District. The address of the library is 350 West Georgia Street, and the Federal office tower is addressed at 300 West Georgia Street. Levels 8 and 9 were previously leased to the Provincial government. Their address was 360 West Georgia Street.

VPL Central branch internal glass facade overlooks an enclosed concourse formed by a second elliptical wall that defines the east side of the site. This glass-roofed concourse serves as an entry foyer to the library and the more lively pedestrian activities at ground level. Public spaces surrounding the library form a continuous piazza with parking located below grade. The building's exterior resembles the current appearance of the Colosseum in Rome. 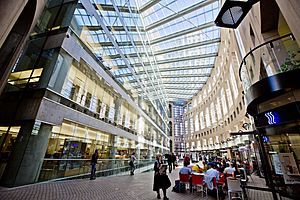 Adjacent to the Central Branch is Library Square, a public square is bordered by Robson Street, Homer Street, West Georgia Street, and Hamilton Street. Across West Georgia Street is Canada Post. Across Hamilton Street is the CBC Regional Broadcast Centre Vancouver. Across Homer street is The Centre in Vancouver for the Performing Arts, (formerly The Ford Centre for the Performing Arts) also designed by Moshe Safdie as a complementary building to library square. The Library Square Project was the largest capital project ever undertaken by the City of Vancouver. The decision to build the project came after a favourable public referendum in November 1990. The City then held a design competition to choose a design for the new building. The design by Moshe Safdie and DA Architects was by far the most radical design and yet was the public favourite. 70% of the public liked the Safdie scheme as a "unique, imaginative, exciting, interesting building." The inclusion of the 21 story office tower in the design was required in order to pay for it and as part of a deal with the federal government to obtain the land; the federal government has a long term lease on the high rise office tower portion of the project. Construction began in early 1993 and was completed in 1995. In the year following the new library's opening, library visitors increased by 800,000.

In addition to its function as the central branch of the city's public library system, the one square block project includes an attached office high-rise, retail shops, restaurants, and underground public parking. The Library building has a rooftop garden designed by Vancouver landscape architect Cornelia Oberlander. The roof garden is accessible by the public. The new 8,000-sq-ft rooftop garden and the expansion to Level 9 were built at a cost of $15.5 million; they opened to the public in September, 2018. The expansion is LEED Gold CIv1 certified, managed by Light House Sustainable Building Centre

There are local bus routes that pass near Library Square including the #'s 5, 17, and 20. and North Shore routes on Georgia Street. (See the List of bus routes in Metro Vancouver)

The three nearest SkyTrain stations are Granville Station, Vancouver City Centre Station and Stadium–Chinatown Station and are each within a few blocks of Library Square. Library Square is also cyclist-friendly, and has three public use bike rack stations.

Library building (including retail and parking)

All content from Kiddle encyclopedia articles (including the article images and facts) can be freely used under Attribution-ShareAlike license, unless stated otherwise. Cite this article:
Vancouver Public Library Facts for Kids. Kiddle Encyclopedia.