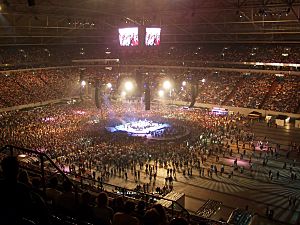 The arena while a concert was taking place.

The Veltins-Arena (between 2001-2005 Arena AufSchalke) in Gelsenkirchen, Germany, is the stadium of the German member of the soccer federal league FC Schalke 04. The Veltins arena is one of the most modern stages of the world and possesses since June 2015 a capacity of 62.271 spectators with plays on national level, with international plays due to the standing place prohibition of 54,740 spectators. Apart from the actual use as football stadium of the FC Schalke 04 also different meetings, like concerts, take place in this multi-function arena. Due to the outline of the Rhine stadium in Duesseldorf the arena became occasionally also venue of the Home plays of the American football crew Rhine Fire.

The Veltins arena got 2004 lent of the UEFA the status of a 5-Stars-Stadium. The comment of the UEFA delegation read even: The place of event will the requirements more than fair and could even than ‚six star Stadion' be evaluated. It may align thereby final games of the UEFA champions League and the UEFA cup.

All content from Kiddle encyclopedia articles (including the article images and facts) can be freely used under Attribution-ShareAlike license, unless stated otherwise. Cite this article:
Veltins Arena Facts for Kids. Kiddle Encyclopedia.