Venlaw Castle, also known as Smithfield Castle, lies north of Peebles on the Edinburgh Road in the Borders of Scotland. Since 1949, it has been operated as a hotel. It was designated in 1971 as a Category A listed building. 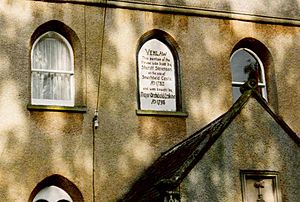 Stone above the door records rebuilding in 1782 by Alexander Stevenson

The site was formally occupied by a 14th-century fortification founded by the Hay family, known as Smithfield Castle, which was destroyed in the 18th century. The present house was built for Alexander Stevenson, Sheriff Deputy of Peebleshire, on the site in 1782. It is an excellent example of the Scottish Baronial architecture, and is set in 4 acres (1.6 ha) of gardens. It remained in the Stevenson family until it was bought by the Grant family in 1790 and then by the Erskine family in 1798. It became the home of Admiral of the Fleet Sir James Elphinstone Erskine in 1862. It then passed to Richard Davidson, a retired tea planter, and then to a Miss Walton in 1946.

All content from Kiddle encyclopedia articles (including the article images and facts) can be freely used under Attribution-ShareAlike license, unless stated otherwise. Cite this article:
Venlaw Facts for Kids. Kiddle Encyclopedia.