Verticordia etheliana is a flowering plant in the myrtle family, Myrtaceae and is endemic to the south-west of Western Australia. It is a shrub with one highly branched main stem, egg-shaped to almost round leaves and spike-like groups of bright red flowers with greenish-cream centres.

Verticordia etheliana is a shrub which grows to a height of 1.0–1.5 m (3–5 ft) and which has one highly branched stem at its base, although the plant is often openly branched. The leaves are broadly egg-shaped, elliptic or almost round, 2–6 mm (0.08–0.2 in) long, sometimes with a few irregular teeth on the edges. 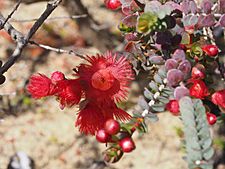 Verticordia etheliana was first formally described by Charles Gardner in 1942 and the description was published in the Journal of the Royal Society of Western Australia from specimens collected between "Yaringa" station and Northampton by William Blackall. The specific epithet (etheliana) honours Ethel Gray Blackall, the wife of the collector of the type specimens.

When Alex George reviewed the genus Verticordia in 1991, he described two varieties of this species:

This verticordia grows in sandy, gravelly or loamy soil, in heath or shrubland between the Billabong Roadhouse and the Kalbarri National Park and as far east as near Mullewa in the Avon Wheatbelt, Geraldton Sandplains and Yalgoo biogeographic regions.

Both varieties of Verticordia etheliana are classified as "not threatened" by the Western Australian Government Department of Parks and Wildlife.

Both varieties of V. etheliana are strikingly attractive and have been grown in gardens, although propagation and cultivation are difficult.

All content from Kiddle encyclopedia articles (including the article images and facts) can be freely used under Attribution-ShareAlike license, unless stated otherwise. Cite this article:
Verticordia etheliana Facts for Kids. Kiddle Encyclopedia.