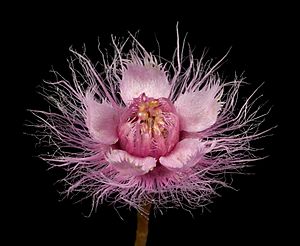 Verticordia insignis is a species of flowering plant in the myrtle family, Myrtaceae and is endemic to the south-west of Western Australia. It is an open, irregularly-branched shrub with small leaves and heads of relatively large pink, or white and pink flowers on the ends of the branches in spring.

Verticordia insignis is an open, irregularly-branched shrub that grows to 1.5 m (5 ft) high. Its leaves are linear to elliptic in shape, roughly triangular in cross-section, 3–7 mm (0.12–0.28 in) long with a rounded end. Leaves near the flowers tend to be wider than those further down the stems.

The specific epithet (insignis) is a Latin word meaning "remarkable", "notable" or "eminent".

This verticordia often grows in association with other species of verticordia in grey or yellow sand near rocks in heath and woodland. It occurs along the Darling Scarp and inland as far as Northam and Brookton in the Avon Wheatbelt, Coolgardie, Jarrah Forest, Mallee, Geraldton Sandplains and Swan Coastal Plain biogeographic regions.

The two subspecies insignis and compta are classified as "not threatened" by the Western Australian Government Department of Parks and Wildlife but subspecies eomagis is classified as "Priority Three" meaning that it is poorly known and known from only a few locations but is not under imminent threat.

This verticordia has horticultural potential because of its flowers, described as "outstandingly beautiful, resembling miniature powder puffs". It has been propagated from cuttings but establishing them in the garden has been difficult.

All content from Kiddle encyclopedia articles (including the article images and facts) can be freely used under Attribution-ShareAlike license, unless stated otherwise. Cite this article:
Verticordia insignis Facts for Kids. Kiddle Encyclopedia.