Verticordia plumosa, commonly known as plumed featherflower, is a flowering plant in the myrtle family, Myrtaceae and is endemic to the south-west of Western Australia. It was the first species in the genus to be described, although initially given the name Chamelaucium plumosum. It is a shrub with linear leaves and rounded groups of scented pink, mauve or white flowers. Two varieties of this species have been declared as being "threatened". 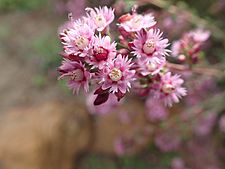 This species was first formally described by René Louiche Desfontaines in 1839 and given the name Chamelaucium plumosum. The description was published in Mémoires du Muséum d'Histoire Naturelle. In 1917, George Druce changed the name to Verticordia plumosa and the change was published in a supplement of The Botanical Exchange Club and Society of the British Isles Report.

Details of the specimens used in the first description of the species are uncertain. The plant was probably first collected by Archibald Menzies, October 1791 and the type collection may have been made in 1803 by Jean Leschenault. Both collections were probably made at the King George Sound, Western Australia. William Baxter collected another early specimen in 1829. The plant was also given the name Verticordia fontanesii by Augustin de Candolle in 1828 but that nomination is no longer accepted.

The specific epithet (plumosa) is derived from the Latin word pluma meaning "feather", referring to the feathery sepals.

He also recognised the following varieties:

A variant, known as 'Eric John', appears to be an intergeneric cross between V. plumosa and Chamelaucium floriferum.

Plumed featherflower mainly occurs in near-coastal areas from the Arrowsmith River to areas east of Esperance but the variety intercrassa is found well inland to areas near Newdegate and Hyden.

All content from Kiddle encyclopedia articles (including the article images and facts) can be freely used under Attribution-ShareAlike license, unless stated otherwise. Cite this article:
Verticordia plumosa Facts for Kids. Kiddle Encyclopedia.