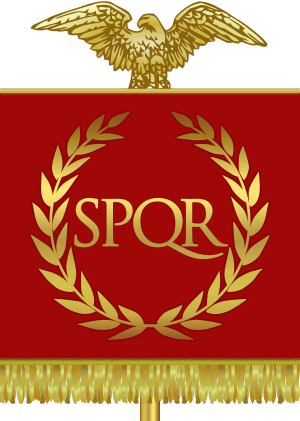 The vexilloid of the Roman Empire was emblazoned with initials S·P·Q·R (senātus populusque Rōmānus), which in Latin means "the senate and the people of Rome".

A vexilloid has the same functions as a flag but it looks different. Vexilloids are characteristic of traditional societies and ancient empires (Flags did not come into general use until medieval times.). A vexilloid consists of a staff held upright with a cloth banner that hangs down vertically on the staff and on top of the staff is an emblem, such as a carved animal.

Whitney Smith, Flags Through the Ages and Across the World,

All content from Kiddle encyclopedia articles (including the article images and facts) can be freely used under Attribution-ShareAlike license, unless stated otherwise. Cite this article:
Vexilloid Facts for Kids. Kiddle Encyclopedia.