Viaduct Harbour, formerly known as Viaduct Basin, is a former commercial harbour on the Auckland waterfront that has been turned into a development of mostly upscale apartments, office space and restaurants. It is located on the site of a formerly run-down area of the Freemans Bay / Auckland CBD waterfront in Auckland City, New Zealand. As a centre of activity of the 2000 America's Cup hosted by the Royal New Zealand Yacht Squadron, the precinct enjoyed considerable popularity with locals and foreign visitors. 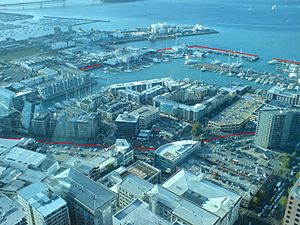 The quarter seen from the Sky Tower, with approximate boundaries shown marked in red 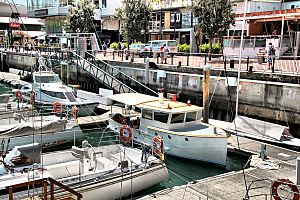 The original redevelopment on the eastern side of the Viaduct Harbour 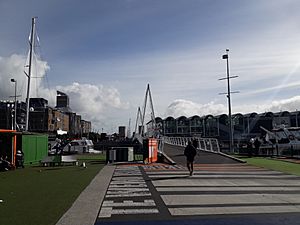 Drawbridge linking the Viaduct Harbour to the Wynyard Quarter in Auckland

The proportion of people born overseas was 53.0%, compared with 27.1% nationally.

Although some people objected to giving their religion, 57.4% had no religion, 30.4% were Christian, and 8.3% had other religions.

Designed along the line of the basins common in London, the Viaduct Basin was so-called because of a failed scheme by the Auckland Harbour Board in the early years of the 20th century. As the size of ships was increasing dramatically, rather than build new wharves or dredge the harbour channels, it was proposed that cargo ships moor out in the Waitematā Harbour channel and be unloaded into "lighters", small barges that would then ferry the goods to shore via the specially built wharves in the new "Viaduct Lighter Basin". The shipping companies refused to co-operate and forced the Harbour Board to engage in dredging and the construction of new wharves.

This left the partially completed lighter basin without a real purpose, so it was used to berth the various fishing boats and thus tidy up the appearance of the Auckland waterfront further east. Next to the Lighter Basin a fish market and various warehouses were constructed, including Turners & Growers Ltd, the city's main produce wholesalers. The far side of the area was connected by a mechanical bridge that was able to be raised to allow passage into the basin to the fishing vessels which used it.

Timber mills had occupied the edges of Freeman's Bay prior to the construction of the Lighter Basin and Victoria Park; these continued to be a feature of the area for most of the 20th century along with other industries such as foundries, many of which were associated with ship building in one way or another.

The redevelopment of the Lighter Basin as the Viaduct Harbour in the late 1990s as a mixed-use area of apartments and restaurants has had uneven success. Some of the resulting buildings are considered very handsome, and the area was provided with a good selection of public and semi-public spaces. A colourful array of working boats and yachts, some of them available for charter, moor in the basin itself. The Auckland City Council initiated a program of public artworks for the area.

However some of the new residents of the area objected to the use of the public spaces for events on the grounds of noise, so the attractive and expensive hard landscaping is less used than originally intended. As the area was designed as a setting for ongoing use by large crowds of people as it saw during the America's Cup in 2000, the spaces look very empty and bland without these people.

The success of the hospitality quarter has become problematic as well. Some local residents have objected to the high prices charged by the restaurants and shops. As it is adjacent to the National Maritime Museum, the Tepid Baths pools, and the stylish Princes Wharf development, the Viaduct Harbour continues to be a popular attraction for Auckland residents and tourists, but there are ongoing noise and security issues connected with the local venues and eateries.

The local apartment-owners are described as a relatively affluent and somewhat older demographic, with many using their apartments only as their "city home" while living on places like Waiheke Island during the weekend. Residents complained that few residents know each other, and that a community spirit was mostly absent in the new quarter, at least in the immediate years after development.

Adjacent to the area are the National Maritime Museum, the Tepid Baths pools, Victoria Park and the stylish Princes Wharf development. The Auckland CBD and main waterfront areas lie directly to the east of the development, while the Northern Motorway - a short distance to the west - allows motorised connection to places beyond.

Auckland City, in its plans to transform the 'Tank Farm' (a large industrial wharf area further to the west) into residential and/or park areas, stated that it will be vital to secure the western viaduct area in public ownership (as the eastern edge already is), so that the area can be managed as a single regional facility. This would require securing the America's Cup bases plus the remaining ports areas to allow public access around the entire viaduct harbour.

A 2003 proposal to rename the Viaduct Harbour to 'Blake Harbour' (for Sir Peter Blake, a famous New Zealand yachtsman) was not successful.

All content from Kiddle encyclopedia articles (including the article images and facts) can be freely used under Attribution-ShareAlike license, unless stated otherwise. Cite this article:
Viaduct Harbour Facts for Kids. Kiddle Encyclopedia.