The Victoria Gardens Cultural Center (VGCC) is a community library and performance venue attached to the Victoria Gardens lifestyle center in Rancho Cucamonga, California. The building, which links the Lewis Family Playhouse, the Paul A. Biane Library, and the 4,500-square-foot (420 m2) Celebration Hall under one roof, officially opened on August 19, 2006. It is supported, in part, by The Rancho Cucamonga Library Foundation and the Rancho Cucamonga Community Foundation. These two organizations joined together in 2002 to create the Promoting Arts and Literacy (PAL) fundraising campaign. Since then these two groups have continued to hold their annual fundraising events: the Rancho Cucamonga Public Library Telethon and the Community Foundation Gala for the sole benefit of the PAL campaign. 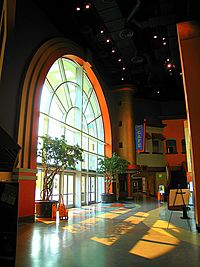 Lewis Family Playhouse is a city-owned and -operated performing arts center in the city of Rancho Cucamonga, California. The Playhouse is unique in that 65 percent of its shows are also owned, operated and produced by the city.

The resident companies, which are owned and operated by the city, include the following: 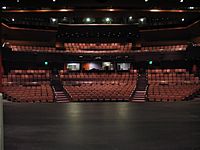 The Playhouse has a total of 536 seats. This includes 8 spaces for wheelchairs. Additional assisted seating is available by removing seats in row G. An additional 24 seats are available when the apron of the stage is at floor level.

The 536 seats are distributed as follows:

The Paul A Biane Library opened alongside the Lewis Family Playhouse with the Victoria Gardens Cultural center in August 2006. The building was named after San Bernardino County Supervisor Paul Biane who secured more than $1 million USD in tax money to build the library. There have been talks to expand the Biane Library, which has 14,000 square feet (1,300 m2) of space on the second floor that is not utilized. The proposed concept for the space is a children's center. 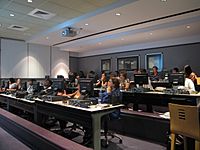 The Library features a 21 computer technology center, 5 study rooms available for public use that accommodate anywhere from 2 to 6 people, a quiet reading room, a 'Boutique Bookstore' and free wireless internet provided by the city of Rancho Cucamonga. The library also has a wide variety of programs designed especially for children and adults. They also occasionally team up with the Lewis Family Playhouse to put on events that use the 4,500-square-foot (420 m2) Celebration Hall rental facility, The Lewis Family Playhouse, the Imagination Courtyard and the library itself.

Celebration Hall is a 4,500-square-foot (420 m2) facility with the flexibility of sectioning the hall in up to three rooms. Its main function is to serve as a multi-purpose room with full kitchen amenities and audio/visual capabilities. Patrons utilize the space for anything from business meetings to wedding receptions.

All content from Kiddle encyclopedia articles (including the article images and facts) can be freely used under Attribution-ShareAlike license, unless stated otherwise. Cite this article:
Victoria Gardens Cultural Center Facts for Kids. Kiddle Encyclopedia.