Rancho Cucamonga is a suburban city situated at the foothills of the San Gabriel Mountains in San Bernardino County, California. It is located 37 miles (60 km) east of Downtown Los Angeles. The city had a population of 165,269 in 2010 and an estimated population of 174,305 in 2014. The city experiences an average of 287 sunny days per year, compared to a national average of 205 days. Its climate is classified as warm Mediterranean, or Csa, under the Köppen climate classification system. The city's seal, which centers on a cluster of grapes, alludes to the city's agricultural history and intimate connections to wine-making.

The city's favorable location and host of public amenities have earned it numerous distinctions. Notably, Money Magazine ranked Rancho Cucamonga 42nd on its "Best Places to Live" list in 2006. In addition, Insider Magazine established one Rancho Cucamonga neighborhood as the 13th richest neighborhood in Southern California. All of the city's four public high schools earned the Silver distinction in a 2015 ranking of the nation's high schools by U.S. News & World Report. The city's proximity to major transportation hubs, airports, and highways has attracted the business of the nation's largest corporations including Coca-Cola, Nong Shim, Frito-Lay, and Amphastar Pharmaceuticals.

Rancho Cucamonga's first settlers were Native American. By 1200 A.D., Kukamongan Native Americans had established a village settlement in the area around present-day Red Hill, near the city's western border. Kukamonga derives its name from a Native-American word meaning "sandy place." Anthropologists have determined that this cluster of settlers likely belonged to the Gabrielino culture, at one time one of the largest concentrations of Native American peoples on the North American continent. In the 18th Century, following an expedition led by Gaspar de Portola, the land was incorporated into the Mission System established by Father Junipero Serra and his group of soldiers and Franciscan Monks.

The front of John Rains' House, a National Historic Place.

After a half-century of political jockeying in the region, the land finally came under the control of Juan Bautista Alvarado, governor of Mexico. On March 3, 1839, Alvarado granted 13,000 acres of land in the area called Cucamonga to Tubercio Tapia, a first-generation Spanish native of Los Angeles, successful merchant, and notorious smuggler. Tapia went on to establish the first winery in California on his newly deeded land. Rancho Cucamonga was purchased by John Rains and his wife in 1858. The Rains family's home, Casa de Rancho Cucamonga, was completed in 1860 and now appears on the National Register of Historic Places.

During the ensuing years the town prospered and grew. In 1887, irrigation tunnels were dug into Cucamonga Canyon by Chinese laborers and the Santa Fe Railroad was extended through the area. Among the town's economic mainstays was agriculture, including olives, peaches, citrus, and, most notably, vineyards. In 1913, the Pacific Electric Railway was extended through Rancho Cucamonga in an effort to improve crop transportation. Several landmarks in existence today pay tribute to the city's multicultural founding. In particular, Our Lady of Mt. Carmel remains as a relic of the area's Mexican agriculture laborers while the Chinatown House stands as a reminder of the Chinese immigrants who labored in constructing the area's infrastructure.

In 1977, the unincorporated communities of Alta Loma, Cucamonga, and Etiwanda voted to incorporate, forming the city of Rancho Cucamonga.

The former community of Grapeland, first settled in 1869, lay roughly between today's Victoria Groves Park and Central Park. There was a schoolhouse which also doubled as a church. In 1890 an irrigation district was formed and $200,000 in bonds were sold to pay for improvements. The Sierra Vista reservoir was built in 1886-87 by J.L. Scofield as the focal point of a network of irrigation pipes. The system was unused, however, because the bond issue was declared illegal. "Orchards and vineyards began to die," The Daily Report newspaper reported in a retrospective. "Residents moved out. The post office closed in 1905. Homes, buildings were destroyed or abandoned." The reservoir remained unused until 1956, when the Fontana Union Water Company filled it with 5 million gallons of water. The local school district was merged with the Etiwanda district in 1901. In 1957 the settlement was practically deserted, but there were still rabbit-proof stone walls marking boundaries of previous citrus orchards.

Rancho Cucamonga is part of the Inland Empire and San Bernardino County, a region that lies inland from the pacific coast and directly east of Los Angeles county. Rancho Cucamonga is located about 37 miles (60 km) east of Los Angeles, bordered by Upland to its West, Ontario to its South, the San Gabriel Mountains to its North and I-15 and Fontana to its East. The city sits atop an alluvial plain and views of Cucamonga Peak, one of the tallest peaks of the San Gabriel Mountains, are available from all points throughout the city. The city has a total area of 39.9 square miles (103 km2), 99.95% of which is land and 0.05% water.

The city's climate is classified as warm Mediterranean, or Csa, under the Köppen climate classification system. Yearly precipitation is 15.3 inches (390 mm) and the city experiences an average of 287 sunny days per year, compared to a national average of 205 days. 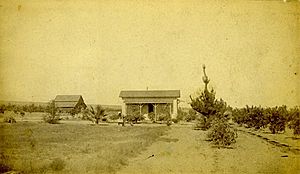 Orchards and farms, such as this Cucamonga ranch photographed in 1884, had dominated the landscape of the area until the land development boom in the late 20th century.

The name "Cucamonga" became well known to fans of Jack Benny's popular radio program, in which an announcer, voiced by Mel Blanc, would call out: "Train leaving on track five for Anaheim, Azusa and Cu-camonga!" This running gag became so well known that it eventually led to a statue of Benny in Cucamonga.

In the 1970s, Sesame Street often referenced Cucamonga, including the neologism "Cucamongaphobia".

Bugs Bunny cartoons feature numerous references to Cucamonga. In Mutiny On the Bunny, Cucamonga is one of the stickers on the boat at the end of the cartoon that Bugs is riding in. In My Bunny Lies Over The Sea, Bugs reads map directions that include "turn left at Cucamonga".

The city Rancho Cucamonga was featured in the hit 2000 stoner comedy film Next Friday starring Ice Cube and Mike Epps.

Rancho Cucamonga has been featured on the Comedy Central hit show Workaholics where it was nicknamed "Hollywood East". The main characters are said to live in the heart of Rancho Cucamonga.

All content from Kiddle encyclopedia articles (including the article images and facts) can be freely used under Attribution-ShareAlike license, unless stated otherwise. Cite this article:
Rancho Cucamonga, California Facts for Kids. Kiddle Encyclopedia.