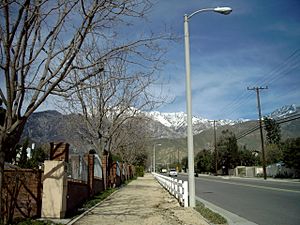 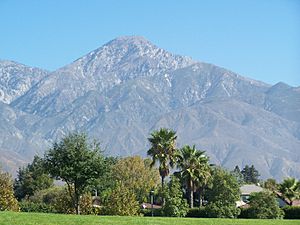 Alta Loma is one of the more affluent areas in San Bernardino County. It is almost completely residential and, by city ordinance, no commercial business may exist above 19th Street, with the exception of several businesses already in place when the ordinance was enacted (notably at the intersection of Lemon Avenue and Haven Avenue). In addition, homes north of Banyan Street must have a minimum of 1/2 acre lots, with the exception of the development known as "Compass Rose Phase II", directly west of Chaffey College (between Banyan Street and Wilson Avenue). Compass Rose Phase II was granted permission for smaller lots provided the development connected to city sewer systems instead of septic tanks. For some reason all of the homes in Compass Rose are on septic tanks.

The three communities incorporated after years of debate and at least one failed attempt on the ballot. Residents of Alta Loma and Etiwanda finally agreed to incorporation provided their identifying community names would be kept along with separate post offices and ZIP codes. In addition, businesses are permitted to use either Alta Loma or Rancho Cucamonga on letterheads, business permits, and other records.

Alta Loma (and much of the rest of Cucamonga) was formerly home to old citrus groves and grape vineyards. The reason many homes above Banyan Street, in particular, have orange and lemon trees on their property may be attributed to this; many horse trails are lined with eucalyptus trees, which are former windbreaks for the groves. Even among the office buildings and shopping malls that have been built in recent decades, the occasional patch of greenfield has a few rows of grapevines.

Most of the homes in the foothills of Alta Loma and Etiwanda sit on alluvial fans punctuated by deep debris canyons. Some of these canyons are used for water collection and thus the area does not typically take water from the Colorado River.

Cucamonga Canyon in particular is a favorite among hikers, although dangerous due to the rough terrain, loose rocks, possible flooding, poison oak, bears, mountain lions, rattlesnakes, bobcats, and other wildlife. Far up the canyon are the Cucamonga Falls, which have occasionally caused contention between the city council, residents, and developers, due to developers wanting to build homes over the falls.

Several high voltage transmission lines cross the community's northern edge just at the base of the mountains, creating an effective barrier to further development except in the case of the hills above Beryl Street, home to a former Christmas tree farm, which has been slated for development of sixty, $1 million homes across approximately 300 acres (1.2 km2).

The Alta Loma area experiences high winds known in the Inland Empire and the rest of Southern California as the "Santa Ana winds." Heavy rain storms in the past created the need for 12–18-foot-deep (3.7–5.5 m) concrete flood control channels to prevent severe flooding that historically killed many people, including a young mother and her two children in 1981 at the intersection of Beryl and 19th Streets.

Alta Loma rests on the Cucamonga-Sierra Madre earthquake fault. It is a thrust fault, meaning the sides of the fault push toward each other. Several other earthquake faults pass through the area, too, including the massive San Andreas Fault system, of which most of the area's faults are a part. 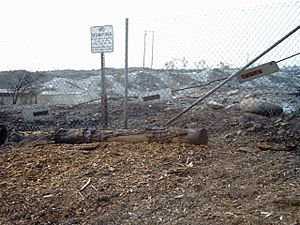 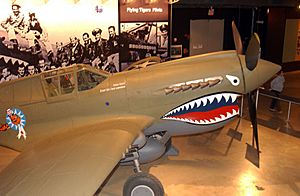 P-40 Warhawk like those flown by the Flying Tigers

Rancho Cucamonga, Alta Loma and Etiwanda were most affected by the October 2003 Grand Prix fire, which combined with the Old Fire. The Grand Prix fire, which began October 21, 2003, ripped across the mountains just above and, in some places, down into Alta Loma and Etiwanda for six days. Overgrown brush fueled fire, which ran across the mountain tops and higher foothills to eventually fly into the canyons that are surrounded by homes. It destroyed 13 homes (including 2 mobile homes) and five outbuildings, and damaged 9 others in Alta Loma. 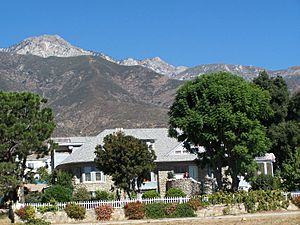 The Demens-Tolstoy Estate on Hillside and Archibald 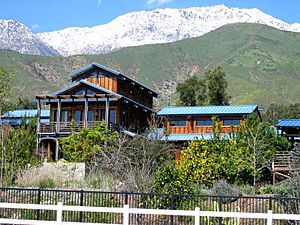 The Sam Maloof house at the top of Carnelian Street

All content from Kiddle encyclopedia articles (including the article images and facts) can be freely used under Attribution-ShareAlike license, unless stated otherwise. Cite this article:
Alta Loma, Rancho Cucamonga, California Facts for Kids. Kiddle Encyclopedia.