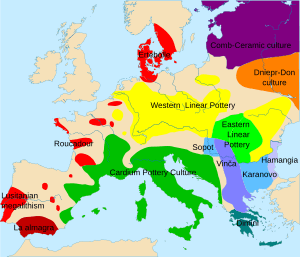 Influence of different cultures during the stone age, in Europe. Vinča is shown in light purple. 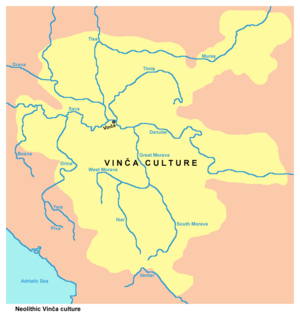 The Vinča culture was a culture during the stone age, roughly from 5400 BC to 4600 BC. It is named for a large site found close to modern-day Belgrade, Serbia. In addition to the territory of modern-day Serbia, sites have also been discovered in Romania, Hungary and Bosnia. Today, it is known for many ceramic figurines. Some of these figurines also have symbols on them, which have been interpreted as an early form of writing. These symbols are called Vinča symbols.

The Vinča culture was the first to develop the knowledge and skills to process copper, in the late 6th millennium BC.[2]

All content from Kiddle encyclopedia articles (including the article images and facts) can be freely used under Attribution-ShareAlike license, unless stated otherwise. Cite this article:
Vinča culture Facts for Kids. Kiddle Encyclopedia.