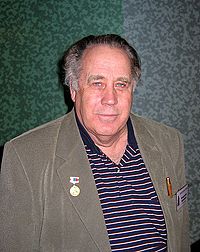 Vladislav Petrovich Krapivin (Russian: Владислав Петрович Крапивин; 14 October 1938 – 1 September 2020) was a Russian children's books writer. He was born in Tyumen, then-Soviet Union. He began working for Ural Pathfinder newspapers. Many of his books were published by Sverdlovsk Publishing House. His best known books were Meet My Brother (1968) and August: The Month of the Winds (1975).

Krapivin was hospitalized for pneumonia on 10 August 2020 in Yekaterinburg, Russia. He died on 1 September 2020, aged 81.

All content from Kiddle encyclopedia articles (including the article images and facts) can be freely used under Attribution-ShareAlike license, unless stated otherwise. Cite this article:
Vladislav Krapivin Facts for Kids. Kiddle Encyclopedia.