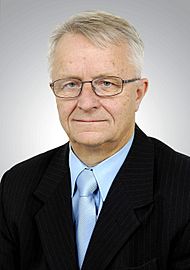 He was a member of the Polish Solidarity trade union where he was the director of its Regional Coordinating Commission for Health Service Workers. During the martial law in Poland he was arrested and interned. He participated in the Round Table talks. He was a Minister of Health (January 1991 – December 1991).

All content from Kiddle encyclopedia articles (including the article images and facts) can be freely used under Attribution-ShareAlike license, unless stated otherwise. Cite this article:
Władysław Sidorowicz Facts for Kids. Kiddle Encyclopedia.