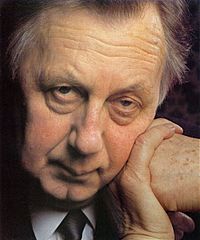 Włodzimierz Kotoński (23 August 1925 – 4 September 2014) was a Polish composer. In the years 1974–1976 he was head music editor at the Polskie Radio and head music director for the Polish Radio and Television.

In the years 1980–1983 he was vice president, and in 1983–1989 president of the Polish Section, International Society for Contemporary Music (ISCM).

Kotoński died in Warsaw, Poland at the age of 89.

All content from Kiddle encyclopedia articles (including the article images and facts) can be freely used under Attribution-ShareAlike license, unless stated otherwise. Cite this article:
Włodzimierz Kotoński Facts for Kids. Kiddle Encyclopedia.