Wainoni is one of the eastern suburbs of Christchurch. It is a lower socio-economic area.

Wainoni is a Māori word, with wai meaning stream and noni meaning a bend or turn. The name was applied by Alexander William Bickerton to his new home on the Avon River. 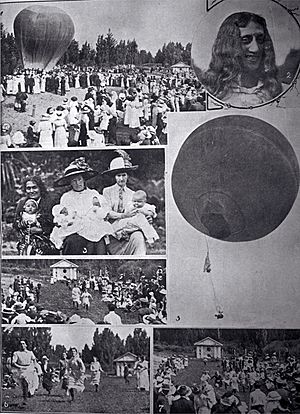 In 1884, Bickerton and his family moved into a new home near New Brighton, Christchurch that he named Wainoni. Bickerton, who purchased a 30 acres (12 ha) property around what is now Bickerton Street, was one of the three foundation professors of Canterbury College. It became a centre for the social life of students at the Canterbury College. The property included a small theatre, a vast garden, and fireworks displays for entertainment. Bickerton's idea for the property was to create a new form of society based around his socialist beliefs, however this social experiment was discontinued after several years. From 1903 the property was turned more into a theme park to provide family income, with a zoo, 7,000 person amphitheatre, conservatory, aquariums, cinema, medicine and fireworks factories, and mock naval battles on a man-made lake. It attracted hundreds of thousands of people over the coming years. In the end the Pleasure Gardens, as they were called, started running at a loss and was closed by 1914.

The suburb developed for housing during the 1960s.

Porritt Park, an old loop of the Avon River, lies within Wainoni. Going clockwise from there, boundary roads of the suburb are Wainoni, Breezes, Pages, and Kerrs Roads. Wainoni is approximately 7 kilometres (4.3 mi) from the central city. Wainoni Park is located in the adjacent suburb of Aranui.

Wainoni and its neighbouring suburb of Aranui are often considered together and intermixed. For example, Wainoni School and Wainoni Park are located in Aranui, and Aranui High School is located in Wainoni. Christchurch City Council publishes a combined community profile for the two suburbs.

All content from Kiddle encyclopedia articles (including the article images and facts) can be freely used under Attribution-ShareAlike license, unless stated otherwise. Cite this article:
Wainoni, Canterbury Facts for Kids. Kiddle Encyclopedia.