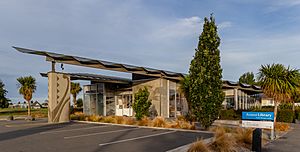 Aranui is one of the eastern suburbs of Christchurch. It is a lower socio-economic area. The area is predominantly residential with pockets of light industry. There is a cluster of shops and service facilities at the intersection of Breezes Road and Pages Road.

Aranui is a Māori word, with ara meaning path and nui meaning great.

Part of the area was previously called Flemington, named after the hairdresser and tobacconist Jubal Fleming (c.1844–1903). Fleming had a subdivision at the corner of Breezes and Pages Roads, and the tram stop on Breezes Road was informally called Flemington. The post office was established in 1912 and it was named Aranui by George Kyngdon Burton (c.1859–1957), with that name then applied to the wider area.

Mabel Howard, New Zealand's first woman cabinet minister, was once a resident in the area.

Aranui is one of the eastern suburbs. Its eastern boundary is the Avon River. Boundary roads are Pages Road in the south, Breezes Road in the west, and Wainoni Road in the north. Bexley is located to the south of Pages Road. Aranui and its neighbouring suburb of Wainoni are often considered together. For example, Wainoni School and Wainoni Park are located in Aranui, and Aranui High School is located in Wainoni. Christchurch City Council publishes a combined community profile for the two suburbs.

The proportion of people born overseas was 13.4%, compared with 27.1% nationally.

Aranui is served by the composite school Haeata Community Campus in Wainoni, which was created by a merger of four schools in 2017.

All content from Kiddle encyclopedia articles (including the article images and facts) can be freely used under Attribution-ShareAlike license, unless stated otherwise. Cite this article:
Aranui Facts for Kids. Kiddle Encyclopedia.