Bexley is one of the eastern suburbs. Its eastern boundary is the Avon River. Boundary roads are Pages Road in the north, Shuttle Drive in the west, and Cuthberts Road, Breezes Road and Bridge Street in the south. Bexley was substantially damaged in the February 2011 earthquake, with approximately 90% of homes in the area needing to be demolished, mostly due to the effects of liquefaction. Much of the suburb is now nature reserve. Aranui is located to the north of Pages Road.

Bexley is best known for its wetlands which in recent years have been developed for housing and also a wildlife preserve. There are a number of walkways along the Avon River and through the Bexley wetlands area.

Bexley is considered a High Risk Flood Zone. The Avon River can carry around 30% of Christchurch’s Storm water discharge and many parts of Bexley are threatened by the combination of high tides and flooding. New homes and significant changes to older homes require an increase to either the floor level and/or the ground level.

Housing in Bexley is a mix of styles mainly from the early 1960s onward. Recent developments around wetland areas have seen large growth in new medium-sized bungalow style houses since the late 1990s. And most usable property will be built on by late 2007. There has been consistent activity in subdividing larger older properties since the late 1970s which is expected to continue well in to the future.

Other recent changes include the linking of Anzac Drive and Bexley Road to complete the Christchurch East Ring Road to the port of Lyttelton. 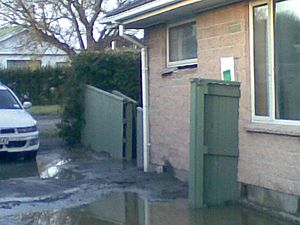 Liquefaction has caused this house to sink after the Christchurch earthquakes.

In the earthquake of September 2010 over 100 houses in the suburb were rendered uninhabitable by silt and subsidence due to soil liquefaction.

Flooding from soil liquefaction again caused serious flooding, and damaged roads and services in February 2011 from the 2011 Christchurch earthquake.

In June 2011 the government announced that for a number of areas in Christchurch "There is significant and extensive area wide land damage; The success of engineering solutions may be uncertain in terms of design, its success and possible commencement, given the ongoing seismic activity; and, Any repair would be disruptive and protracted for landowners." As a result, the government offered to purchase the properties owned in this and similar areas for their pre-quake rateable value. Bexley and other affected areas have been classified as a red zone.

All content from Kiddle encyclopedia articles (including the article images and facts) can be freely used under Attribution-ShareAlike license, unless stated otherwise. Cite this article:
Bexley, New Zealand Facts for Kids. Kiddle Encyclopedia.