The Wairarapa Railway Restoration Society is a railway heritage and preservation community group in the town of Carterton, in the Wairarapa district of New Zealand's North Island. The society has leased the Carterton railway station building through the Carterton District Council, though it is owned by the New Zealand Railways Corporation.

The impetus for the formation of the society was a proposal in the 1980s to demolish the historic station building at Carterton station and replace it with a more modern structure. Some concerned locals formed a group in 1990 with the goal of preventing this and restoring the station building. After recovering from an arson attack in 1993, the refurbishment was finally completed in 1996.

Since then, the society has been responsible for maintenance of the buildings and fences at the site, and has worked with other local like-minded groups to acquire items of local historical interest for their archives and display in the Carterton Railway Museum at the Carterton railway station.

The society is a member of the following organisations: 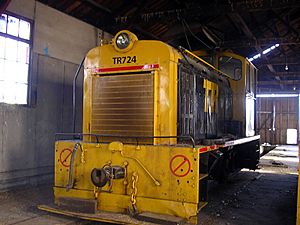 The museum normally opens to the public on Sundays. Displays include:

Upon occasion, the society has been involved in or associated with plans to relocate other buildings of historical railway interest in the Wairarapa to the Carterton station precinct for preservation purposes, including the Greytown station goods shed (currently located on West Street in Greytown) and the class 6 passenger shelter building from Solway station.

All content from Kiddle encyclopedia articles (including the article images and facts) can be freely used under Attribution-ShareAlike license, unless stated otherwise. Cite this article:
Wairarapa Railway Restoration Society Facts for Kids. Kiddle Encyclopedia.