Carterton is a small town in the Wellington Region of New Zealand and the seat of the Carterton District. It lies in a farming area of the Wairarapa in New Zealand's North Island. It is located 14 kilometres (8.7 mi) southwest of Masterton and 80 kilometres (50 mi) northeast of Wellington. The town has a population of 5,130 (June 2016), out of a total district population of 8,900.

Carterton was founded in 1857. Originally known as Three Mile Bush, it served as housing for workers building the road between Wellington and Masterton. It was later renamed after Charles Carter, who was in charge of the building of the Black Bridge over the Waiohine River south of the town. The town describes itself as New Zealand's daffodil capital, holding a Daffodil Festival each year on the second Sunday in September.

Carterton claimed to be the first place in the world with a transsexual mayor, Georgina Beyer. Beyer went on to become the MP for Wairarapa.

On 7 January 2012, a hot air balloon crashed just north of the town, killing eleven people and making headlines around the world. The balloon came into contact with a high-voltage power line supplying the town, resulting in the balloon catching fire and the town losing power briefly.

Carterton's town clock is located on High Street next to the post office. The existing tower was put into operation in September 1962, replacing the original clock tower atop the post office that was damaged in the 24 June 1942 Wairarapa earthquake.

The Bank of New South Wales, showing confidence in Carterton, built a beautifully ornate bank building on the corner of Park Road and High Street North in 1912. This building is listed in the historic buildings list found in the Wairarapa Combined District Plan. In 1982, the Bank of New South Wales became Westpac and continued to occupy the building until a devastating earthquake in Christchurch (6.3 on the Richter scale) severely damaged many unreinforced masonry buildings in February 2011. After an unfavourable engineers' assessment the bank shifted out of the building approximately 150 metres south in High Street North. The building requires extensive earthquake strengthening in the near future. 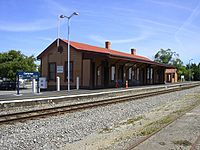 Historic Carterton Railway Station is located west of the town centre off Belvedere Road. The station building at the station is original, having been built when the railway opened in 1880, and has accepted passenger services ever since. It is currently leased from KiwiRail Network by the Wairarapa Railway Restoration Society.

The Carterton District library on Holloway Street is New Zealand's oldest purpose-built library that is still in use as a library today.

The Carterton Events Centre is also on Holloway Street. Opened in October 2011, this state-of-the-art, multi-purpose community facility is available for community and commercial use. Centrally located in the Wairarapa region, the Centre provides modern, flexible, spaces for all manner of events, shows, exhibitions, meetings and community gatherings. Interconnection of spaces throughout the Centre allows for separation and opening up of spaces to cater for different needs. The Events Centre belongs to the Carterton community, through the Carterton District Council.

Carterton's Memorial Square is on the corner of High Street and Park Road and holds Carterton's World War One memorial, positioned centrally. The red granite pillar, apparently broken off at the top, symbolising the lives cut short by the war. The memorial was unveiled on 13 February 1921 by Minister of Internal Affairs George Anderson. Since the 1930s Memorial Square has been administered under an act of parliament – the Carterton and District Memorial Square Act (1932).

Located 10 minutes from the Square is Stonehenge Aotearoa, built by members of The Phoenix Astronomy Society, it is a modern adaptation (opened in 2005) of the Stonehenge ruins on the Salisbury Plain of England.

Carterton District is a rapidly expanding area which, according to inter-census dates (i.e. between 2006 and 2013) is the fastest growing local government area in the North Island with respect to population. A number of new subdivisions have assisted in this expansion such as Hartley Avenue, Daffodil Grove, Armstrong Avenue, Tararua Crescent, Carrington Drive and Mill Grove.

Carterton is served by State Highway 2, the main highway between Wellington and Masterton. The highway runs the length of High Street.

Carterton is served by bus route 200, which connects Carterton with Masterton, Greytown, Featherston and Martinborough.

All content from Kiddle encyclopedia articles (including the article images and facts) can be freely used under Attribution-ShareAlike license, unless stated otherwise. Cite this article:
Carterton, New Zealand Facts for Kids. Kiddle Encyclopedia.