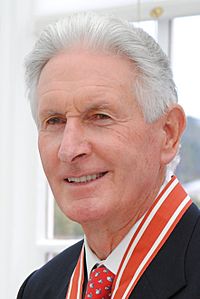 Sir Robert James Charles ONZ KNZM CBE (born 14 March 1936) is a New Zealand professional golfer. He was born in Carterton, New Zealand. In his fifty years career, many rank him among the most successful left-handed golfers of all time. He is the first lefty to win a golf major, winning more than 70 titles, and beating his age twice during a tournament as a 71-year-old.

All content from Kiddle encyclopedia articles (including the article images and facts) can be freely used under Attribution-ShareAlike license, unless stated otherwise. Cite this article:
Bob Charles (golfer) Facts for Kids. Kiddle Encyclopedia.