Kids Encyclopedia Facts
For other places with the same name, see Greytown (disambiguation).

Greytown, or Te Hupenui, population 2,001 (at the 2006 Census), is a town in the Wairarapa region of New Zealand, in the lower North Island. It is 80 km north-east of Wellington and 25 kilometres southwest of Masterton, on State Highway 2.

Greytown was first settled on 27 March 1854 under the Small Farms Association Settlement Scheme and was named after Governor Sir George Grey, who arranged for the land to be bought from local Māori. It became a Borough in 1878 and a ward of the South Wairarapa District Council in 1989.

The first Arbor Day celebration in New Zealand was held in Greytown on 3 July 1890. Greytown Beautification Society has done a lot to keep the spirit alive for many years, especially Stella Bull and the park bench in the park dedicated to her, which states, "Only God can make a Tree". The town has many beautiful trees and a register is kept to help protect them.

In the 1870s, when the Public Works Department announced plans that the Wairarapa Line railway between Featherston and Masterton was not going to pass through Greytown, local protests were successful in attaining approval for a branch line from the Wairarapa Line at Woodside, which opened on 14 May 1880. For a few months Greytown was the terminus of the Wairarapa Line before the extension from Woodside to Masterton opened, but once it was relegated to branch line status it was one of the quietest railway lines in the country. It closed on 24 December 1953, and at the time of closure its revenue was only a tenth of its operating costs. Greytown passengers are now serviced by Woodside Railway Station on the Wairarapa Line.

The town is proud of its history, claiming to have the most complete main street of Victorian architecture in the country, and of being the first planned inland town. It has played on these assets, creating a revival largely based on its architecture. Retailers like the butcher have changed their 1970s street frontage to a more Victorian one.

Heritage buildings are recorded by the Greytown Community Heritage Trust. The Greytown Hotel claims to be one of New Zealand's oldest surviving hotels.

Greytown was marketed as "The fruit bowl of the Wairarapa" when fruit was grown on the west of the town with orchards like Westhaven and Pinehaven.

Greytown is a popular weekend and holiday destination. The main street has a number of antique stores and cafes. The official camping ground next to the soldiers' memorial park is often full during a long weekend or a holiday.

The town is linked to Wellington and Masterton by train and New Zealand State Highway 2, the latter via a scenic mountain route peaking at the Rimutaka summit. 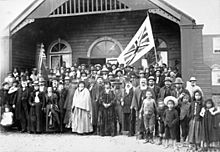 The opening of the Māori Parliament at Pāpāwai, 1897, attended by Premier Richard John Seddon.

Pāpāwai marae is just to the east of Greytown. Its meeting house, named Hikurangi, dates from 1888 and is unique in that the magnificent carved ancestors that surround the pā face inward. In the late 19th century it was an important site of Te Kotahitanga, the Māori parliament movement. In the 1890s sessions were held at Pāpāwai, and were reported in Huia Tangata Kotahi, a Māori-language newspaper published by Īhāia Hūtana from 1893 to 1895. A large building was constructed at Pāpāwai to house the parliament, used for sessions in 1897 and 1898. The parliament passed a resolution to end the sale of Māori land and was visited by Governor General Lord Ranfurly, and by Premier Richard Seddon. From the 1910s Pāpāwai fell into disrepair, and little was done until the 1960s when conservation work was carried out on the carved figures. In the late 1980s the marae was fully restored, and is again in full use by the community.

The Māori name for Greytown is Te Hupenui, the literal translation of which is "the big snot", better translated as "the fluid that comes out of your nose at a tangi or funeral".

All content from Kiddle encyclopedia articles (including the article images and facts) can be freely used under Attribution-ShareAlike license, unless stated otherwise. Cite this article:
Greytown, New Zealand Facts for Kids. Kiddle Encyclopedia.