Kids Encyclopedia Facts
This page is about a town in New Zealand. For other uses of Outram, see Outram (disambiguation). 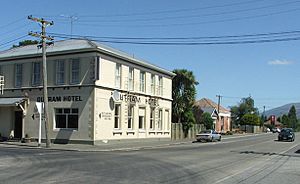 Outram Hotel, in the main street of Outram.

Looking southeast across the Taieri Plains from near Outram. 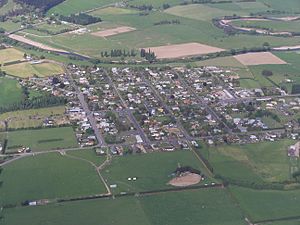 Outram from the air.

Outram is a rural suburb of Dunedin, New Zealand, with a population of 642 (2006 Census). It is located 28 kilometres west of the central city at the edge of the Taieri Plains, close to the foot of Maungatua. The Taieri River flows close to the southeast of the town. Outram lies on State Highway 87 between Mosgiel and Middlemarch.

The original town was formed at a river crossing (ferry then bridge) on a route to the Central Otago goldfields. The village was moved following a flood in the late 19th century and relocated to its current location. It was the first town in New Zealand to have electric street lights and still has the towns library. From 1877 until 1953, Outram was served by a branch line railway that connected with the Main South Line. This line was known as the Outram Branch and it had a relatively unremarkable career. Closure came as a result of an almost total absence of traffic caused by the development of road transport during the first half of the 20th century, and today, few remnants of the line are visible.

Outram's facilities include Outram Primary School, Outram Library, West Taieri Rugby Club, Church, Memorial Hall, Outram Hotel, a handful of retail outlets including a cafe and some antique shops. The West Taieri Cemetery is on the outskirts of the town. Outram is administered by Dunedin City Council, and has reticulated water supply, but no reticulated sewerage.

Sir John Richardson named the town after Sir James Outram, a British general in the Indian Rebellion of 1857.

All content from Kiddle encyclopedia articles (including the article images and facts) can be freely used under Attribution-ShareAlike license, unless stated otherwise. Cite this article:
Outram, New Zealand Facts for Kids. Kiddle Encyclopedia.