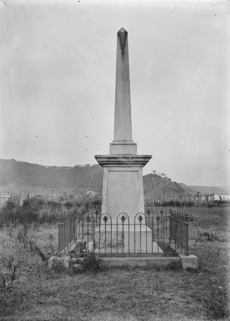 The Waitangi Treaty Monument in 1912 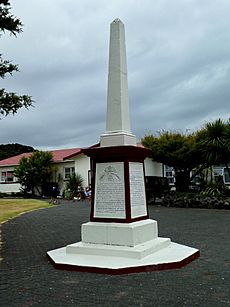 The Waitangi Treaty Monument in 2019

The monument was built in circa 1880–1881. Its inscription shows the full text in its Māori version of the Treaty of Waitangi.

The monument was registered as a Category I heritage item by the Historic Places Trust on 19 March 1987 with registration number 71. It is located on Te Karuwha Parade in Paihia.

In mid-1880, members of Ngāpuhi commissioned the Auckland-based stonemason company of Buchanan to construct a memorial commemorating the signing of the Treaty of Waitangi. The memorial foundation base was constructed out of Sydney sandstone (described as 'Sydney freestone' in contemporary reports of the time period), the material used for the memorial itself was Oamaru stone. It was constructed with a large base with a shaft, capital and frieze with a diminishing column with the entire structure reaching a total height of 17 feet (5.2 m). Plaques bearing an inscription of the full text of the Treaty of Waitangi in Māori were placed on all four sides of the base as well as a further inscription that 512 chiefs had been signatories.

All content from Kiddle encyclopedia articles (including the article images and facts) can be freely used under Attribution-ShareAlike license, unless stated otherwise. Cite this article:
Waitangi Treaty Monument Facts for Kids. Kiddle Encyclopedia.