Kids Encyclopedia Facts
For other places of a similar name, see Walker's Point.

The Walker's Point Historic District is a mixed working class neighborhood of homes, stores, churches and factories in Milwaukee, Wisconsin, with surviving buildings as old as 1849, including remnants of the Philip Best Brewery and the Pfister and Vogel Tannery. In 1978 it was added to the National Register of Historic Places. The NRHP nomination points out that Walker's Point was "the only part of Milwaukee's three original Settlements to reach the last quarter of the Twentieth Century with its Nineteenth and early-Twentieth Century fabric still largely intact," and ventures that "For something similar, one would have to travel to Cleveland or St. Louis if, indeed, so cohesive and broad a grouping of...structures still exists even in those cities."

In 1833 George Walker arrived from Illinois to the wild country that would become Milwaukee. In 1834 he staked a claim to 160 acres on the point of land south of the confluence of the Milwaukee and Menomonee Rivers, and built a crude cabin and trading post at what is now the east side of Fourth Street where it meets Bruce. He chose this point on a low ridge because much of the land around was lower and marshy. The ridge itself was covered with hawthorn and hazelnut bushes, and was traversed by two Indian paths heading for the river. A village of Potawatomi lived nearby, near where Sixth Street and National Avenue now meet.

Walker may have been the first settler south of the rivers, but Solomon Juneau had been fur-trading nearby, east of the Milwaukee River, since 1819. By the 1830s the settlement around his trading post was growing into 'Juneautown.' Also in the 1830s, Byron Kilbourn started a competing town on the west side of the Milwaukee River, 'Kilbourntown.' Walker's Point developed more slowly than the other two settlements, not even platted until 1842. Nevertheless, 1,366 people lived there by 1846 when the three settlements were joined into the City of Milwaukee.

By 1855 the Walker's Point contained 3,843 people, with 3,017 of those immigrants. The majority were German immigrants, but also significant numbers of Scandinavians and Irish. These were supplemented by Polish immigrants in the 1870s and 80s.

The neighborhood that developed over the years is mixed, ranging from workers' cottages to large architect-designed homes, and from craftsman's shops to large factories. Here are some notable surviving buildings: 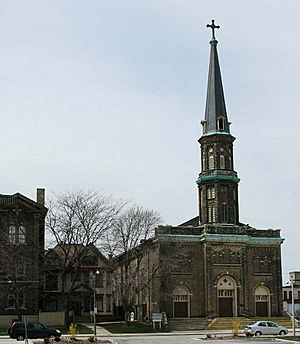 All content from Kiddle encyclopedia articles (including the article images and facts) can be freely used under Attribution-ShareAlike license, unless stated otherwise. Cite this article:
Walker's Point Historic District Facts for Kids. Kiddle Encyclopedia.