The Wall Street Mill in Joshua Tree National Park was a complete and operable gold ore crushing mill featuring late-19th century two-stamp mill machinery. Consequently, the significance encompasses the mill machinery, the building which houses it, the well which supplied water for the mill's operation, and the well pump. It is the only gold ore crushing mill in the region that retains integrity.

The stamp mill building is framed with heavy timber and built on a downward sloping hillside to take advantage of gravity in the milling process. The roof and some of the exterior walls are covered with corrugated sheet metal, while some of the exterior walls have either vertical or horizontal wooden siding. At the top of the building a long wooden ramp supports the track of an ore tramway which carried ore from where it was unloaded from trucks to the top of the mill above the two-stamp Baker Iron Works crusher. A gasoline engine powered the mill; it was built by the Western Gas Engine Company of Los Angeles. A Myer concentrating table was used in separating the gold from the ore.

The complex included the mill, a well, a bunkhouse and an outhouse. The supporting buildings are largely ruinous.

The mill was built by Bill Keys, a local rancher, miner and character, using equipment moved from Pinon Wells. In the 1940s, Keys was involved in a dispute with Worth Bagley over access to the Wall Street Mill. Keys shot and killed Bagley in 1943 and placed a stone commemorating the event with the inscription: "Here is where Worth Bagley bit the dust at the hand of W. F. Keys, May 11, 1943." The marker is not a part of the Wall Street Mill historic district. 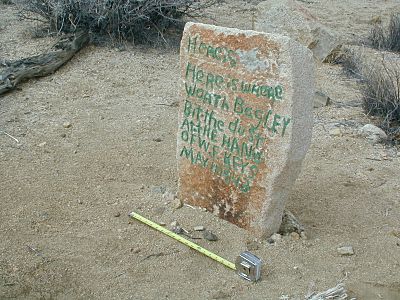 Worth Bagley Stone. The green paint within the lettering was a modern-day act of vandalism.

All content from Kiddle encyclopedia articles (including the article images and facts) can be freely used under Attribution-ShareAlike license, unless stated otherwise. Cite this article:
Wall Street Mill Facts for Kids. Kiddle Encyclopedia.