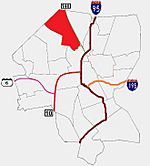 Providence neighborhoods with Wanskuck in red

Wanskuck is a neighborhood in the northern edge of Providence, Rhode Island. Along with Charles, it is one of two neighborhoods comprising what is often referred to as the North End. Wanskuck is bounded to the east by Route 146, to the west by Providence College, Admiral Street, Route 7, and Huxley Avenue, and to the south roughly by Fillmore Street. Parts of Wanskuck north of Branch avenue are the Wanskuck Historic District.

All content from Kiddle encyclopedia articles (including the article images and facts) can be freely used under Attribution-ShareAlike license, unless stated otherwise. Cite this article:
Wanskuck, Providence, Rhode Island Facts for Kids. Kiddle Encyclopedia.