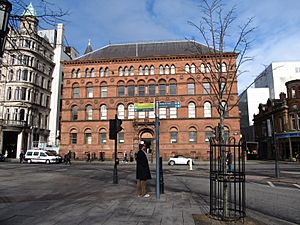 The Water Office is a former warehouse at 1 Donegall Square, Belfast, Northern Ireland, that is listed by the Northern Ireland Department for Communities at grade B1, citing both "Historic Interest" and "Architectural Interest".

It was built between 1860 and 1879 in an Italian Gothic style to the designs of William H. Lynn for Richardson Sons and Owden, linen merchants. It became the offices of the Belfast City and District Water Commissioners before the Second World War during which it was badly damaged by German bombing, and later a shop for Marks & Spencer.

All content from Kiddle encyclopedia articles (including the article images and facts) can be freely used under Attribution-ShareAlike license, unless stated otherwise. Cite this article:
Water Office, Belfast Facts for Kids. Kiddle Encyclopedia.