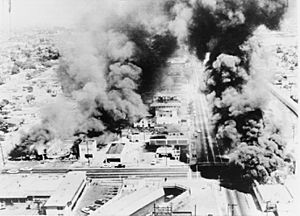 Burning buildings during the riots

The Watts riots was a race riot which lasted 6 days in August 1965 in Watts part of Los Angeles, California. 34 people died, 1,032 were hurt, and 3,438 went to jail. It was the worst riot in Los Angeles history until the 1992 Los Angeles riots.

All content from Kiddle encyclopedia articles (including the article images and facts) can be freely used under Attribution-ShareAlike license, unless stated otherwise. Cite this article:
Watts Riots Facts for Kids. Kiddle Encyclopedia.