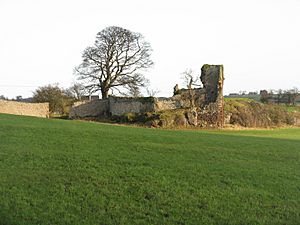 Waughton Castle is a ruined castle, dating from the fourteenth century, about 3 miles (4.8 km) north of East Linton, and 2 miles (3.2 km) west of Whitekirk in East Lothian, Scotland. It is a scheduled monument.

Waughton Castle was a castle with a courtyard, but only part of one wing remains. The ruins are on a rock terrace, which is about 15 feet higher than the surrounding ground to the west and south. The remains of a small tower, at the south-west angle, and which is built of rubble with freestone dressing, stand up to 25 feet in height. Features of a narrow window in the south wall suggest that this is a 16th-century structure. A wall has been built to east and north of the rock, with a structure at the angle, but they are believed to date from later. There is a partially artificial stairway up the rock. There is a doocot in the grounds. 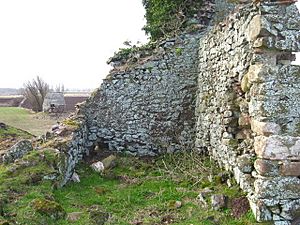 Interior of the ruins

There is a mention of a hall at ‘Walchtoun’ in a document from 1395. The castle was the property of the Hepburn family. It was sacked by the English in 1547. Subsequently, when it was in the keeping of the Laird of Carmichael it was raided by a dispossessed Hepburn. The Hepburns acquired the castle again by legal means, and retained it until Alexander Cockburn purchased the castle from John Hepburn. By the 18th century the castle was being used as material for building walls and cottages in the area.

All content from Kiddle encyclopedia articles (including the article images and facts) can be freely used under Attribution-ShareAlike license, unless stated otherwise. Cite this article:
Waughton Castle Facts for Kids. Kiddle Encyclopedia.