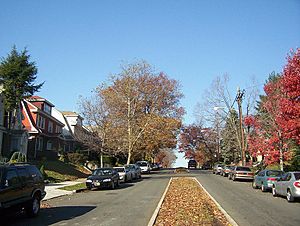 A residential street in Weequahic

Weequahic (pronounced wih-QWAY-ik, though many locals say WEEK-way) is an unincorporated community and neighborhood within the city of Newark in Essex County, New Jersey, United States. Part of the South Ward, it is separated from Clinton Hill by Hawthorne Avenue on the north, and bordered by Hillside Township and the city of Irvington on the west, Newark Liberty International Airport and Dayton on the east, and the city of Elizabeth on the south.

The name "Weequahic" is Lenni-Lenape for "head of the cove". The area was farmland until the late nineteenth century when it was developed into a middle-class, non-industrial neighborhood of detached single-family homes oriented around Weequahic Park. Later a few residential modernist highrises were built.

Weequahic was largely a middle class Jewish neighborhood prior to the 1960s, home to many synagogues, yeshivas, and Jewish restaurants. Newark Beth Israel Medical Center (in Weequahic), the largest hospital in Newark, was built under auspices of the Jewish community. Author Philip Roth grew up in Weequahic, graduated from Weequahic High School in 1950, and many of his novels (such as American Pastoral, Nemesis) are set there.

Heart of Stone, a documentary by Beth Toni Kruvant, focuses on Weequahic High School's decline from 1950's when it graduated more PhDs than any other high school in the country to one of Newark, NJ's most crime ridden schools. Principal Ron Stone wears a bulletproof vest and inspires the students, including gang members to graduate and go to college. He partners with the Jewish and African alumni association to help the current students. The only remaining connection to the Jewish community is Bragman's Delicatessen and Restaurant at 393 Hawthorne Avenue.

The post-World War II growth of suburbs and Second Great Migration of African Americans altered the demographic make-up of Newark in general and the Weequahic section in particular. The neighborhood might have stayed middle class if not for the devastating effects of real estate blockbusting and the construction of Interstate 78. I-78 tore Weequahic's fragile urban fabric and separated the neighborhood from the rest of Newark. The 1967 Newark riots were also devastating to the district. The Weequahic district also experienced white flight, though the focal point of the riots was in the Central Ward. 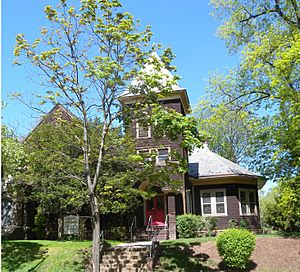 The jewel of the neighborhood is the 311 acre (1.3 km²) Olmsted Brothers-designed Weequahic Park. This lovely park has a 2.2-mile rubberized jogging path around its 80-acre (324,000 m²) lake, and the oldest public golf course in the United States.

Part of the Weequahic neighborhood has been designated a historic district. The neighborhood's major streets are Lyons Avenue, Bergen Street, and Chancellor Avenue.

All content from Kiddle encyclopedia articles (including the article images and facts) can be freely used under Attribution-ShareAlike license, unless stated otherwise. Cite this article:
Weequahic, Newark Facts for Kids. Kiddle Encyclopedia.