List of tallest buildings in Newark facts for kids

Newark, the largest city in New Jersey and second largest in New York metropolitan area, is one of the United States' major air, shipping, and rail hubs. It has a distinctive skyline, though shorter than that of much larger New York City and slightly smaller Jersey City. Since the mid-2000s numerous buildings have been re-lit and made more prominent. Newark was founded in 1666, and its downtown grew around the site of the early settlement at Four Corners. Early highrises were developed there and at Military Park during the economic boom of the Roaring Twenties. In the New Newark era (1950s-1970s) modernist buildings went up, particularly around Washington Park. In the post-industrial-high tech era, development has been concentrated in the Gateway District near Penn Station. Clusters of residential highrises (not included in this list) are found throughout the city, particularly near Weequahic Park and Branch Brook Park. Three ZMPC Super-Post-Panamax container cranes each measuring 561 ft (171 m) at Port Newark are the tallest structures in the city. 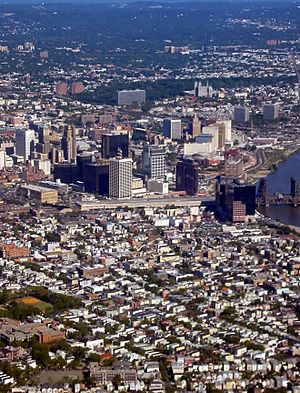 View of Newark looking northwest in 2005.Several highrise buildings added to the skyline since. 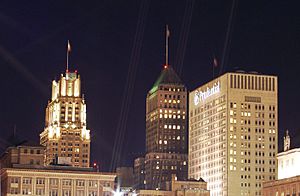 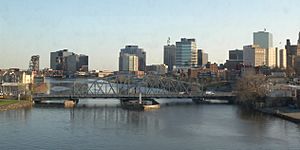 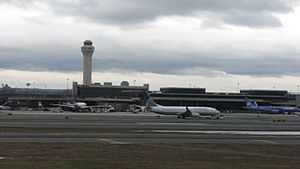 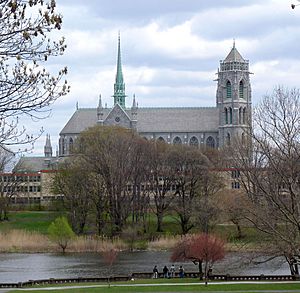 Cathedral Basilica of the Sacred Heart 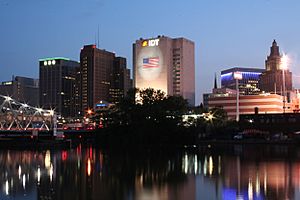 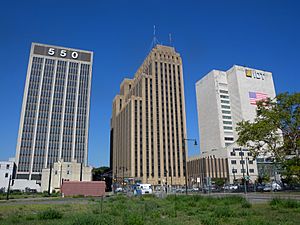 Timeline of tallest buildings since 1868 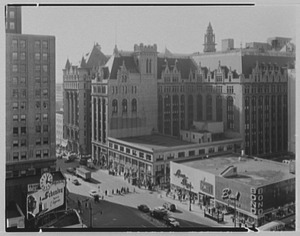 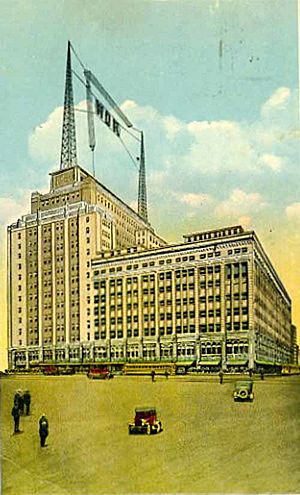 This lists buildings that once held the title of tallest building in Newark.

Proposed and under construction

Grant USA Tower would have been the tallest building in the United States had it been built. This lists buildings that are proposed for construction.

All content from Kiddle encyclopedia articles (including the article images and facts) can be freely used under Attribution-ShareAlike license, unless stated otherwise. Cite this article:
List of tallest buildings in Newark Facts for Kids. Kiddle Encyclopedia.