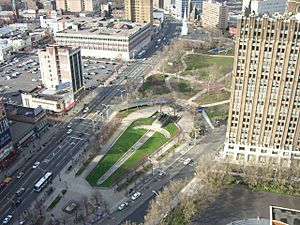 The base of the Wars of America (1926) monument at Military Park, created by the sculptor of Mount Rushmore to honor America's war dead. "The design represents a great spearhead. Upon the green field of this spearhead we have placed a Tudor sword, the hilt of which represents the American nation at a crisis, answering the call to arms." – sculptor Gutzon Borglum

Military Park is a 6-acre (24,000 m2) city park in Downtown Newark, Essex County, New Jersey, United States. Along with Lincoln Park and Washington Park, it makes up the three downtown parks in Newark that were laid out in the colonial era. It is a nearly triangular park located between Park Place, Rector Street and Broad Street.

The New Jersey Historical Society, Military Park Building, the New Jersey Performing Arts Center, the Robert Treat Center and the newly built One Theatre Square and 50 Rector St buildings are located across Park Place from the park. A $3.25 million renovation led by Dan Biederman was announced in February 2012. The reconstruction was expected to be completed in late 2013, but due to harsh weather was postponed until spring 2014. A casual restaurant, Burg, does business in the park. The park reopened in June 2014.

There was a period of time in the mid-20th century where the park fell into disrepair. The grounds were considered unsafe and therefore unsuitable for the general population's usage. Military Park fell into a state of disrepair until conservation efforts began in 2003 and ground was broken in 2013. The new park grounds boasts a more open and inviting atmosphere for passersby as well as a revitalized location in downtown Newark. 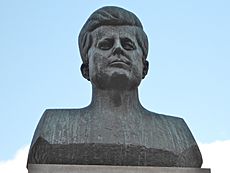 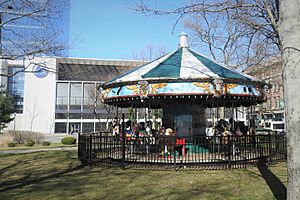 In the southwestern part of the park is the large Wars of America monument, created by Gutzon Borglum, the sculptor of Mount Rushmore.

The sculpture itself forms the base of a large concrete sword built into the ground. The sword from the ground resembles a large dry fountain and from the air its shape is easily distinguished. The sword is about eighty yards long from the end of the statue to its tip; the blade is over ten feet across at its base. A bust of John F. Kennedy by Jacques Lipchitz was erected in 1965. The park also has an old drinking fountain with the phrase "My cup runneth over" carved around its base, and statues of Frederick Frelinghuysen and Philip Kearny. There is also an old fashioned carousel that was recently installed. 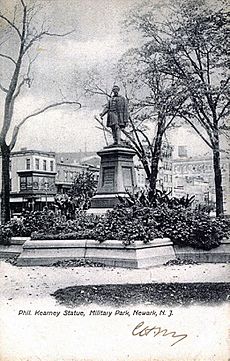 A three-level underground parking garage is located beneath the park. The Military Park Newark Light Rail station lies under the southwest end of the park at Raymond Boulevard and Park Place.

Located in the middle of the park is the casual restaurant and outdoor bar the Burg, which opened in the fall of 2015. The menu includes burgers, shakes, and salads.

Doane Park is a tenth-acre triangular piece of land north of Military Park, where Broad Street and Park Place veer off and is separated from Military Park by Rector Street. A statue of Monsignor George Hobart Doane, for whom the park is named, was unveiled in 1908. Doane was a rector at St. Patrick's Pro-Cathedral and did much for the city including his work with the Essex County Park Commission.

All content from Kiddle encyclopedia articles (including the article images and facts) can be freely used under Attribution-ShareAlike license, unless stated otherwise. Cite this article:
Military Park (Newark) Facts for Kids. Kiddle Encyclopedia.