The Home Office Building is located adjacent to Military Park at 10 Park Place in Newark, Essex County, New Jersey, United States. The building was built in 1928 and was added to the National Register of Historic Places on June 17, 1982.

The building is one of two existing structures in downtown Newark commissioned by the Firemen's Insurance Company, an insurance company founded in 1855, to house its offices. 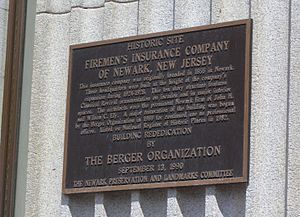 An inscription on a bronze plaque placed by the Newark Preservation and Landmarks Committee reads:

This insurance company was founded in 1855 in Newark. These headquarters were built during the height of the company's expansion in 1924-1928. This ten story structure features Classical Revival ornamentation on facades and in major interior spaces. The architects were the prominent Newark firm John H. and Wilson C. Ely. A major restoration of the building by the Berger Organization was begun in 1989 for continued use as professional offices ... 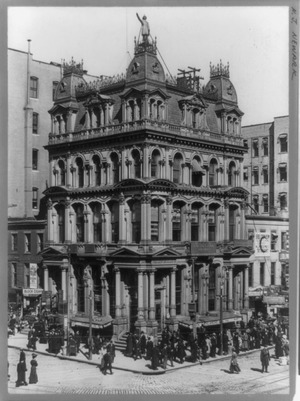 An elaborate Victorian Firemen's Insurance Company Building was constructed at Broad and Market Streets circa 1870. It featured a metallic fireman scupluture on one of its mansarded towers. A tower replaced it in 1910.

The 1910 Firemen's Insurance Building replaced it on the northeast corner of Broad and Market streets, at Four Corners, the spot was once considered one of the busiest intersections in the United States. Completed in 1910, the sixteen-story structure was the first skyscraper in the city, and the tallest in the entire state. The architects were Marvin, Davis & Turton.

All content from Kiddle encyclopedia articles (including the article images and facts) can be freely used under Attribution-ShareAlike license, unless stated otherwise. Cite this article:
Home Office Building Facts for Kids. Kiddle Encyclopedia.