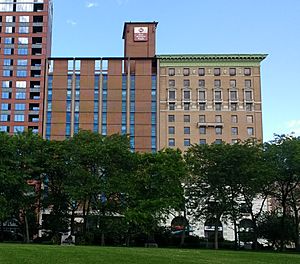 The Robert Treat Center is an office and hotel complex in Newark, New Jersey, named for Robert Treat, who founded the city in 1666. One building originally opened as the Robert Treat Hotel in 1916. The landmark was later converted to an office building after the construction of a newer hotel next to it. The adjacent buildings are located at Military Park near the New Jersey Performing Arts Center, One Theater Square and New Jersey Historical Society.

Among the first guests at the original hotel were President Woodrow Wilson and Mrs. Wilson, who came to represent the national administration for the Newark Board of Trade annual dinner as part of the 250th anniversary of the city of Newark. The accommodations on the fifth would later be known as the "President's Suite". Designed by Guilbert and Betelle in a Renaissance Revival style, the exterior features granite and cast stone at the base, with brick and terra cotta trim covering the upper stories. The hotel was intended to make use of every luxury and technology available at the time in the hotel industry and would be the very first of its kind in the city. Perhaps the most impressive structure of the original hotel was the lobby, where huge columns combined with intricate lighting features over a white marble steps, tile floors, and lavish rugs. There were plentiful lounge space, large palms and potted plants, and writing desks and tables on a balcony for afternoon tea. A portrait of Robert Treat was prominently placed over the fireplace mantle.

In 1933, the Hotel was operated by Niagara Falls businessman Frank A. Dudley and the United Hotels Company.

In 1964, the building was converted into offices with the addition of the new Robert Treat Hotel next door, part of Best Western. In 1982, the Robert Treat Center was turned down for inclusion on the State and National Register of Historic Places because of significant alterations in the interior. The building was purchased in 1987 by The Berger Organization, which has also renovated some of the city's other commercial landmarks, such as the Firemen's Insurance Company Home Office Building and Military Park Building. They sold the Griffith Building, which they had intended to renovate, in 2018.

All content from Kiddle encyclopedia articles (including the article images and facts) can be freely used under Attribution-ShareAlike license, unless stated otherwise. Cite this article:
Robert Treat Center Facts for Kids. Kiddle Encyclopedia.