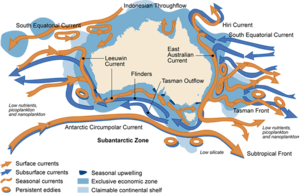 It starts as the Southern Indian Ocean Current, a part of the larger Antarctic Circumpolar Current (also known as the West Wind Drift). As the current approaches Western Australia, it turns north, parallel to the western coast of Australia, and becomes the West Australian Current.

The current is mainly seasonal, being weaker in winter and stronger in summer, and is affected by the winds in that area.

All content from Kiddle encyclopedia articles (including the article images and facts) can be freely used under Attribution-ShareAlike license, unless stated otherwise. Cite this article:
West Australian Current Facts for Kids. Kiddle Encyclopedia.