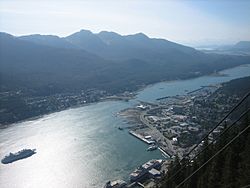 West Juneau is at left, in this view from the Mount Roberts Tramway.

West Juneau is a populated place in Juneau, Alaska, United States. It is located on Douglas Island 1.8 miles (2.9 km) northwest of Douglas. The name was first published by the United States Geological Survey in 1948 and entered into the Geographic Names Information System on March 31, 1981. Despite its location on Douglas Island, the neighborhood was juridically a part of the City of Juneau, rather than the City of Douglas, prior to municipal unification in 1970.

The area is predominately residential, with minor marine-related industrial uses occurring along the shoreline. There are a number of large condominium developments and a public housing project, with the remainder of the residences being primarily single-family. The neighborhood previously had a grocery store, until it was removed to make way for a roundabout at the Douglas Island end of the Juneau-Douglas Bridge.

All content from Kiddle encyclopedia articles (including the article images and facts) can be freely used under Attribution-ShareAlike license, unless stated otherwise. Cite this article:
West Juneau, Juneau Facts for Kids. Kiddle Encyclopedia.