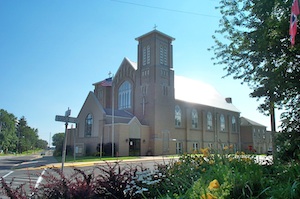 Westby Coon-Prairie Lutheran Church is an ELCA Lutheran church located in Westby, Wisconsin and is part of the La Crosse Area Synod. It is currently served by Pastors Dan and Julie Wollman. As of 2012, the congregation has 1,012 baptized members.

The Norwegian Evangelic Lutheran Church and Cemetery, also known as Country Coon Prairie Church and Coon Prairie Cemetery, was built in 1910. It was designed by architects Parkinson & Dockendorff in Late Gothic Revival architecture. It was listed on the National Register of Historic Places in 1986.

All content from Kiddle encyclopedia articles (including the article images and facts) can be freely used under Attribution-ShareAlike license, unless stated otherwise. Cite this article:
Westby Coon-Prairie Lutheran Church Facts for Kids. Kiddle Encyclopedia.